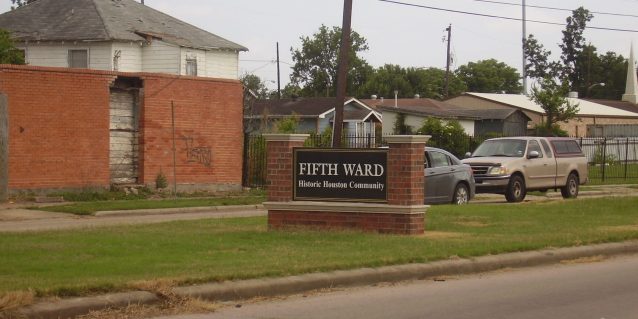 (Beyond Pesticides, December 2, 2021) Thousands of residents in Houston, Texas are suing Union Pacific Railroad Company for contaminating their properties with highly hazardous creosote wood preservatives. One of these lawsuits comes from Latonya Payne, legal guardian of Corinthian Giles, a 13-year-old boy who died of leukemia after a five year battle with the disease. A recent report found that the community is in the midst of a childhood leukemia cancer cluster, with disease rates five times the national average. Late last month, U.S. Environmental Protection Agency (EPA) Administrator Michael Regan toured the area as part of his Journey to Justice tour. However, while Administrator Regan vows federal assistance with the cleanup of these long-lived chemicals, EPA is currently in the process of reauthorizing creosote use for another 15 years with the knowledge that it is virtually impossible to produce and use without causing contamination and poisoning. Some environmental advocates are suggesting that Administrator Regan take a tour of EPA’s pesticide registration program and stop the unnecessary poisoning that disproportionately affects people of color and those with vulnerabilities or preexisting medical conditions that increase their vulnerability to toxic chemical exposure. While advocates say that cleaning up EPA’s mess in communities is critical, they insist that it is just as important to prevent future harm by keeping hazardous chemicals out of the market.

Creosote was used to treat and extend the life of railroad ties at a location in Houstonâ€™s Greater Fifth Ward up until 1984, but since that time a plume of contamination in the soil has slowly worked its way through the low-income, predominantly black community currently living near the old site. Creosote is a is a complex mixture of approximately 150 to 200 chemicals derived from coal. Chemical analysis of creosotes show that it is composed of approximately 85 percent polycyclic aromatic hydrocarbons (PAHs), 10 percent phenolic compounds, and five percent nitrogen-, sulfur-, or oxygen- containing heterocyclic compounds. PAHs are hazardous environmental pollutants and are well known carcinogens and mutagens with endocrine disrupting properties that pose a serious threat to human health. The International Agency for Research on Cancer lists creosotes as probable carcinogens (group 2A) with sufficient evidence of carcinogenicity based on animal studies. Creosote is still registered for use on railroad ties and utility poles.

Residents of the Fifth Ward say they have been dealing with the health effects of creosote pollution for decades. Long-time resident Dianna Cormier Jackson told Click2Houston that she could smell the creosote when living in the area as a child. â€śMy mom, my uncle, two of my brothers, one of them worked for Southern Pacific, but they just brushed it off, my ex-husband died, my mother in law, a whole bunch of my neighbors,â€ť Ms. Jackson told the news station. Houston resident Sandra Edwards told CBS News that over a dozen people living on her street have died of cancer. “We’ve been fighting this threat four, five years and nobody has come over,” she said. “Everybody want to come see what’s going on, but nothing has been done.”Â

Pressure increased on Houston Mayor Sylvester Turner, and the city eventually requested that the state conduct a cancer cluster study in the region. The findings reveal incidence of acute lymphoblastic leukemia nearly five times higher than what would be expected. These results add considerable weight to ongoing lawsuits, including Latonya Payneâ€™s fight for justice for her nephew Corinthian Giles. Ms. Payneâ€™s wrongful death suit names Union Pacific, alleging that the company consciously released hazardous creosote into the area and then attempted to conceal the danger the contamination posed. The lawsuit was also filed against the City of Houston, claiming that the city failed to alert the community to the hazards of creosote, or take any action to reduce or mitigate the contamination. “He just wanted to make sure that the doctors did everything they could to try to save his life. Until the very last breath, he fought and he fought,” Ms. Payne told CBS News. “Everyday it’s hard, honestly, we are all struggling with having to live without him.”Â

â€śChildren are dying from contamination that has been spreading for decades. Enough is enough. Union Pacific and the City of Houston need to accept responsibility and take action to remedy this tragedy immediately,â€ť said attorney Jason Gibson of The Gibson Law FirmÂ to Bellenews.

Administrator Regan visited Fifth Ward neighborhoods and acknowledged the lack of action from state and federal officials. “We have a sense of urgency in cleaning up this mess,” Mr. Regan told CBS News. “I don’t believe we’ve been aggressive enough in terms of state and federal reaction.” At a roundtable meeting, KHOU11 indicates he told residents, â€śThe goal is definitely not a photo-op for EPA, but it is an opportunity to elevate environmental justice on the national stage.â€ť

While it is important for this environmental crisis to receive additional attention from state and federal officials, and begin the long clean up process, it is equally important for regulators to stop this issue from happening to other Americans in the future. Last year, a proposal to produce another highly hazardous wood preservative, pentachlorophenol at a site in South Carolina was met with overwhelming public opposition. Gulbrandsen Chemicals, a multinational company with ties to India, attempted to site the penta plant in the majority low-income African American community Orangeburg, South Carolina, raising serious concerns over environmental racism. However, a series of high-profile investigative reports, community advocacy, and political action ultimately resulted in the company abandoning its plans. This victory all but eliminated the global market for penta, leading EPA to issue a notice of intent to cancel uses of pentachlorophenol wood preservatives earlier this year.

But EPA and Administrator Regan still stand behind carcinogenic creosotes. In its proposed interim decision for creosote, EPA wrote, â€śCreosote-treated wood offers unique benefits in the preservation of railroad crossties, wooden utility poles, and round timber foundation piles for land, freshwater, and marine use.â€ť In light of these â€śunique benefits,â€ť the agency did not even consider the viability of alternatives, such as steel, composites, and fiberglass that could replace the hazardous wood preservative process with non or less toxic materials.

It is evident from both history and the present day that chemical corporations target low income, BIPOC neighborhoods to site hazardous industrial processes, creating fence line communities with higher rates of disease incidence and other health problems. Administrator Regan now has the opportunity to not only clean up contamination caused by past injustices, but also stop future injustice directed toward black and brown communities by suspending the registration of hazardous wood preservatives like creosote. Americaâ€™s ongoing post-cautionary approach to environmental management, where we address issues only after environmental pollution and contamination has already occurred, is unsustainable and anathema to public health and environmental stability. Administrator Regan has the power to move our regulatory systems toward precaution, preventing the need for long-term pain and suffering by taking action to stop the release of harmful pesticides and other chemicals before they wreak havoc on individual lives.

Join us today in calling on Administrator Regan, EPA, and Congress to chart a new path for pesticide regulation that holds pesticide companies accountable, and stops unnecessary poisoning. For more information on the dangers of creosote and other wood preservatives, see Beyond Pesticides Â wood preservative program page, as well as comments submitted by Beyond Pesticides to EPA earlier this year.

This entry was posted on Thursday, December 2nd, 2021 at 12:01 am and is filed under Cancer, creosote, Environmental Protection Agency (EPA), Texas, Uncategorized, Wood Preservatives, World Health Organization. You can follow any responses to this entry through the RSS 2.0 feed. You can skip to the end and leave a response. Pinging is currently not allowed.