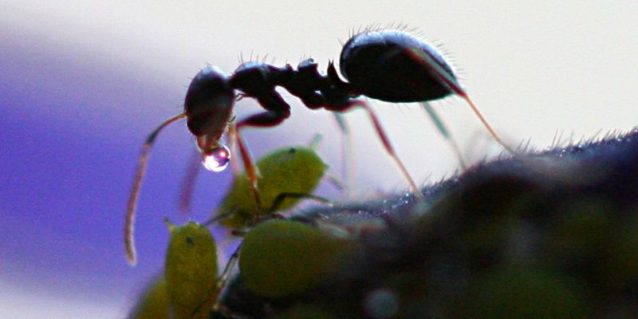 (Beyond Pesticides, January 6, 2022) Seeds treated with neonicotinoid insecticides contaminate honeydew, often the biggest source of food for pest predators, according to recent research published in the journal Environmental Pollution. Concerned advocates for pollinators and pesticide reform are likely familiar with fact that neonicotinoids are systemic, and once applied to a seed or sprayed on a plant are taken up by the plant and distributed throughout the pollen, nectar and dew drops that a plant produces. But there is another systemic effect that is not included in that picture, and in monoculture crops, it could be the biggest source of carbohydrates for beneficial pest predators â€“ honeydew. Honeydew is produced from phloem-feeding (sap sucking) pests like aphids, whiteflies, leafhoppers, and other hemipteran insects. The waste that these insects produce is liquid, and full of sugars. “This rich carbohydrate source is a common food for many beneficial insects, including pollinators, such as bees and flies, and some natural enemies of pests, such as ants, wasps and beetles,” said John Tooker, PhD, coauthor of a recent literature review published in Biological Reviews. “Honeydew often is more abundant than nectar in agroecosystems.”

In 2019, a study published in the Proceedings of the National Academy of Sciences by the same research team determined that neonicotinoids have the ability to pass through sap sucking pests, contaminate honeydew, and kill of beneficial insects. However, the pesticide industry criticized the research, claiming that the laboratory conditions used in the study wouldnâ€™t translate into the field. The study recent published in Environmental Pollution proves that criticism to be specious.

To show the process, researchers chose a study site in Saint Paul, MN where 24 soybean plots were planted in June 2019. Random blocks were assigned in which plants were either untreated, coated with the neonicotinoid thiamethoxam, or coated with a mixture of neonicotinoids and fungicides. Roughly one month after planting, researchers introduced soybean aphids, infecting 10 plants per plot. Two plants per plot were covered with exclusion cages to prevent predation so that researchers could come back and harvest honeydew from the aphids. Honeydew that was collected was analyzed for pesticide concentrations. Pest predators were then collected, placed in a vial, and provided as much of the contaminated honeydew as they could eat. The beneficial predators were then observed until they died.

Researchers found that concentrations of the neonicotinoid clothianidin (the chemical tested by scientists, as it is the immediate breakdown product of the neonicotinoid thiamethoxam), are 9 to 11 times higher in aphid honeydew derived from plants that were seed treated with neonicotinoids (at ~35-45 parts per billion), compared to those untreated. Importantly, however, aphids from untreated blocks also had neonicotinoids in their honeydew (at ~1.5-6 ppb). Researchers indicate that this was either from prior plantings on the plot of land chosen, or from runoff from nearby applications causing contamination in the untreated plot.

In the more expansive, overarching review of threats posed by contaminated honeydew in Biological Reviews, scientists analyzed various routes of honeydew contamination, reviewed various insecticides that have the potential to contaminate honeydew, and analyzed particular agroecological scenarios that pose outsized risks. They indicate that honeydew itself, after excreted from an aphid, can be sprayed or drifted with pesticides that contaminate it. And in addition to excreting the pesticide after feeding on a contaminated plant, pest insects may also have their honeydew contaminated if they are directly sprayed with a pesticide. In direct exposure scenarios, an aphid may excrete honeydew for several days before it dies. However, researchers indicate seed coatings are more insidious. With seed coatings, aphids develop a level of insecticide resistance that allows them to excrete honeydew for longer periods of time. Â

The pesticides identified as particularly problematic for this route of exposure are generally those the researchers indicate have systemic properties.

“Our review describes how honeydew contaminated with systemic insecticides may play a role in insect declines,” Dr. Tooker said. “Honeydew is a hidden driver of direct and indirect interactions among insects that is likely to be affecting the population dynamics of herbivores, biological control agents and pollinators.”

Honeydew is an aspect of the natural world that is not considered by pesticide regulators at any level. However, the science on the â€śpass throughâ€ť effect of neoincotinoids is now well-documented. A 2011 study finds that mites on elm trees sprayed with the neonicotinoid imidacloprid in fact thrived after the exposure, flipping the tables on their predators and causing a predator-prey reversal. Likewise, a 2014 study by Dr. Tooker and colleagues finds that thiamethoxam could pass through pest slugs feeding on neonicotinoid treated seedlings. Predator beetles that feed on the slugs subsequently die as a result of the toxic contamination in their slug prey.

It is critical that pesticide regulators think more broadly about the dangers and complex situations that can occur once a human-made chemical is introduced into the environment to function as a pest predator. In the absence of a truly precautionary system where independent science is adequately considered by regulators, and pesticides are removed from the market when found to cause trophic cascades or other ecosystem disruption, the U.S. Environmental Protection Agency must go beyond individual assessments on categories of plants and animals and consider entire ecosystem health in its regulatory reviews.

With EPA continuing to talk big but act small in reforming its pesticide program, changes to federal pesticide law require Congressional action. Help us tell the Senate that major changes to pesticide regulation â€“including those that go beyond the scope of the current legislation to Protect Americaâ€™s Children from Toxic Pesticides â€“ are urgently needed now. For more information on the dangers that pesticides pose to ecosystem health see the article, Pesticide Use Harming Key Species Ripples through the Ecosystem, and see Beyond Pesticides wildlife and biodiversity program pages.

Image Source: Wikimedia (some ant species form mutualistic relationships with aphids, whereby they consume their honeydew, protect them, and in a sense “farm” them)

This entry was posted on Thursday, January 6th, 2022 at 12:01 am and is filed under Beneficials, Environmental Protection Agency (EPA), neonicotinoids, Thiamethoxam, Uncategorized. You can follow any responses to this entry through the RSS 2.0 feed. You can skip to the end and leave a response. Pinging is currently not allowed.