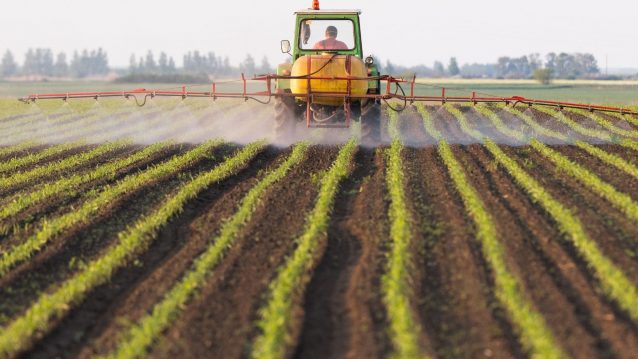 (Beyond Pesticides, February 23, 2022) Fungicide use in agriculture is driving the spread of multi-fungicide resistant human pathogens, finds a recent study conducted by scientists at the University of Georgia. While this occurrence has long been an assumption based on the rampant overuse of fungicides in chemical-dependent farming, scientists have now found clear evidence linking the development of widespread fungal resistance to farming practices, rather than health care use. Despite strong evidence that commonly used synthetic pesticides in chemical-intensive farming are driving resistance that threatens human health on a global scale, the U.S. government has not only failed to take action, it has fought against international efforts to slow the crisis, at the behest of the agrichemical industry. Â

Scientists focused their research on Aspergillus fumigatus, a common mold that can infect humans and cause aspergillosis. Although some have problems with mild sensitivity to the fungus, virulent infections called invasive aspergillosis can occur in immunocompromised individuals and are on the rise. Cases of invasive aspergillosis increased 3% per annum between 2000 and 2013, and roughly 300,000 worldwide are diagnosed each year. On both farms and in human medical settings, antifungal compounds called azole fungicides are used in attempts to kill off A. fumigatus infection.

Of 700 A. fumigatus samples collected, nearly 20% (123) displayed some level of resistance to the commonly used azole fungicide tebuconazole. Twelve of the 123 were highly resistant at clinically relevant levels for human health care. No samples taken from organic sites contained resistant fungi.

It was hypothesized that if the strain of A. fumigatus infecting people developed its resistance traits on a farm, that strain would also have developed some level of resistance to other, non-azole, agricultural fungicides. Sure enough, the azole-resistant strains also displayed resistance to methyl benzimidazole carbamate (MBC) fungicides like carbendazim, and quinone outside inhibitors (Qol) like azoxystrobin.

By sequencing the genomes of A. fumigatus samples both from the current study and those taken and storedÂ  from clinical tests across the world, researchers were able to create a neighbor-joining tree — a sort of family tree of fungicide resistant A. fumigatus. That review showed that genetically, pan-azole resistant strains â€“ those with broad resistance to azole fungicides â€“ matched up closely between those discovered on farms and those found in human clinical settings. Â Of 25 pan-azole resistant samples analyzed, eight farm samples and 12 human clinical samples also displayed resistance to non-azole fungicides.

Aspergillus fumigatus is commonly found both indoors and outside. Infection can occur by simply inhaling a small amount of the fungi.

This result is merely the latest resistant pathogen to trace its lineage back to on-farm use. Over the last decade, scientific evidence has built around the link between common herbicides and antibiotic resistant bacteria. A 2015 study found that Salmonella and E.coli exposed to the herbicides glyphosate, dicamba, and 2,4-D triggered a non-specific defense mechanism which, while building resistance to the toxic effects of the herbicides, also resulted in resistance to commonly used antibiotics. Subsequent research has found soil sprayed with these same herbicides to have higher numbers of antibiotic resistant bacteria than areas where the chemicals were not applied. The resistant genes move throughout the environment by ‘horizontal gene transfer,’ elevating the importance of land and agricultural management practices that eliminate antibiotics and fungicides.Â

Another problematic fungal pathogen, the yeast Candida auris, continues to rapidly develop treatment resistance in human clinical settings, linked to the excessive use of fungicides.

Researchers say their results indicate a need for a shift toward less toxic fungicides that do not cause resistance to human pathogens. â€śThis emergence severely limits the usefulness of fungicides to manage plant pathogens while still preserving the clinical usefulness of azoles,â€ť Dr. Brewer said. â€śWe urgently need effective agricultural fungicides that arenâ€™t toxic to the environment that do not lead to the rapid development of widespread resistance in the clinic.â€ť

While the call is laudable, regulators and politicians are neither heeding the science, nor listening to scientists. The U.S. Environmental Protection Agencyâ€™s recent response to the rise of drug-resistant Candida auris is case in point. The agency failed to assess the efficacy of any pesticides that are not used for public health purposes; EPA only evaluated the efficacy of antimicrobial compounds whose use patterns classify them as human-health-related.

At the international level, a Freedom of Information Act request revealed officials at the U.S. Department of Agriculture working to downplay the role of synthetic fungicide use in chemical agriculture as a factor in the rise of drug-resistant fungal infections worldwide. Not only did they work to deny the truth on the ground, efforts were made to halt protective actions. Emails showed top level officials at industry trade group Croplife America urging USDA officials to â€śmake certainâ€ť that the United Nationâ€™s (UN) Codex Alimentarius, a set of international guidelines and standards established to protect consumer health, made no mention of how fungicides contribute to antibiotic resistance.

Prior research on resistance in agriculture has shown that the only true way to eliminate resistance is to stop using the material that was causing resistance to occur in the first place. Organic agriculture, with its strong restrictions on allowed synthetic materials, provides a path out of the industrialized chemical farming system that overtook agricultural production over the last century. Rising resistance, and the need to retain life-saving medication for protecting peopleâ€™s health, not growing crops, is another reason why investing in organic is the right choice for the future. For more reasons to go organic, see Beyond Pesticides Why Organic webpage.

This entry was posted on Wednesday, February 23rd, 2022 at 12:01 am and is filed under Uncategorized. You can follow any responses to this entry through the RSS 2.0 feed. You can skip to the end and leave a response. Pinging is currently not allowed.