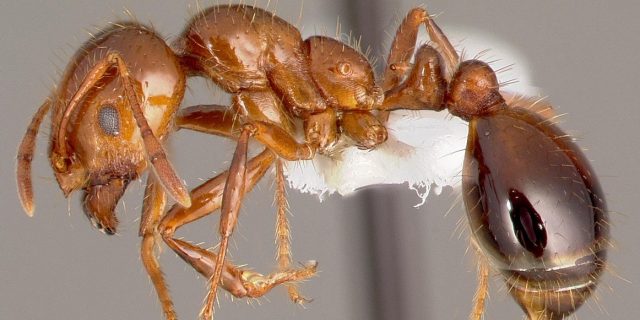 (Beyond Pesticides, June 29, 2022) A virus present in low levels in the United States is effective at managing populations of non-native fire ants, according to research. Although only focused on one particular fire ant, Solenopsis invicta (the red imported fire ant), the study published in the Journal of Invertebrate Pathology shows promise for gardeners, land managers, and the public looking to manage fire ants without the use of hazardous chemical insecticides. As climate change and global trade facilitate the spread of dangerous non-native species, there is a strong need for new and cutting edge approaches that target these pests without significant harm to public health or the surrounding environment.

Prior testing by scientists involved in the current study had indicated that Solenopsis invicta virus 3 (SINV3), found sparsely throughout the U.S., was able to successfully infect and kill imported red fire ants in a laboratory setting. Scientists find that the virus modifies the behavior of worker ants, impeding their ability to either acquire or distribute food to larval ants. Worker neglect caused by the virus results in high larval mortality and degraded queen health, eventually leading to colony failure.

Based on the promising laboratory data, scientists initiated a field trial in Gainesville, Florida. In an area regularly mowed with high fire ant pressure, twelve imported red fire ant colonies were infected with SINV3 using a bait. Testing ensured that the virus was not already present in the field, and a control plot was established nearby to compare efficacy.

After 77 days, fire ants in the area treated with SINV3 show a 7-fold decrease in the overall number of nests and a 60% reduction in the size of their nests. This shows that the virus can quickly replicate and establish itself in a field setting. While virus-infected ant colonies decreased, colonies in the control group increased the size of their nests by roughly 9%. Follow up showed that infected colonies did recover somewhat after the initial exposure, but nonetheless continued to grow more slowly than colonies in the control area. Researchers were still able to detect the virus in the treated areas and found that it had begun to spread to fire ants in the control region.

Testing has confirmed that the virus does not present risks to non-target species. The study notes, â€śThe virus causes no known detrimental ecological impacts, is host specific, and sustained in the environment.â€ť

The imported red fire ant was first found in Alabama in the 1930s, having hitched a ride from South America. It has since spread across the U.S. South, with colonies present from California across through Oklahoma, Tennessee, and Virginia. The ants often move by hitchhiking on agricultural commodities like moved soil and bales of hay. The ants in the wrong place can cause significant economic and ecological damage, and put public health at risk. Eating common crops from corn to citrus, fire ants will also attack young and newborn animals, particularly birds and lizards. They will aggressively defend their nest, responding by swarming a perceived threat and stinging its target repeatedly. Millions of individuals are stung by fire ants every year, and roughly 1% of the population is allergic to their venom. Those allergic comprise the vast majority of the roughly 80 individuals that have been killed by fire ants.

While SINV3 appears to be an effective biocontrol, it is unlikely the silver bullet that many continue to hope for. In other words, it is highly unlikely that these opportunistic species will ever be completely eradicated from their new range. However, this is not the only new biological approach being developed. A study published last year on another non-native fire ant Mymirca ruba (the European fire ant) found that a necromenic nematode known as Pristionchus entomophagus, and pathogenic the bacteria it carries on its skin, may represent an effective biocontrol against fire ants.

As researchers continue to develop new, safer approaches to fire ant management not reliant on chemical pesticides, those dealing with an existing fire ant problem are encouraged to employ an organic approach. To do so, follow Beyond Pesticides ManageSafe resource on Fire Ant Management.

As pressure builds on local land managers to employ toxic pesticides to manage opportunistic weeds and pests, join us in telling your city and county officials to embrace a safer, organic approach to invasive and non-native species.

This entry was posted on Wednesday, June 29th, 2022 at 12:01 am and is filed under Biological Control, Fire Ants, Uncategorized. You can follow any responses to this entry through the RSS 2.0 feed. You can skip to the end and leave a response. Pinging is currently not allowed.