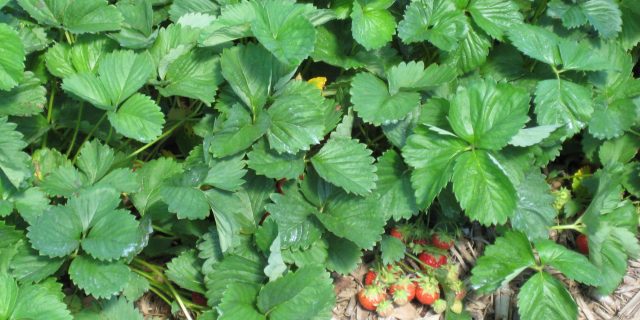 (Beyond Pesticides, September 21, 2022) Strawberry plants pollinated by wild bees exposed to neonicotinoid insecticides produce smaller berries than those pollinated by unexposed bees, finds research published in the journal PLOS One. The findings are yet another piece of evidence pointing to the need for major reforms in the way pesticides are evaluated and pollinators are protected in the United States. As decades of evidence have piled up on the dangers posed by long-lived, systemic, neonicotinoid insecticides, the U.S. Environmental Protection Agency (EPA) has done little to address the damage to pollinator populations, while needed legislation, the Saving Americaâ€™s Pollinators Act, has languished in Congress without a hearing or a vote, despite having over 75 cosponsors.

This new study describes a novel consideration for how neonicotinoids may harm pollinators and impact the food supply. “Previous studies have shown that clothianidin affects wild bees negatively in terms of foraging speed, development and reproduction. Our results indicate that it can also impair the bees’ ability to pollinate strawberry flowers,” says study coauthor Lina Herbertsson, PhD.

Scientists established 12 outdoor cages each with 10 strawberry plants and 11 canola plants. For half of the cages, the canola plants were grown with seeds coated in the neonicotinoid clothianidin and the synthetic pyrethroid cyfluthrin. A small population (5 male, 4 female) of the generalist foraging mason bee Osmia bicornis was permitted to forage within each cage. While cyfluthrin poses a range of risks to pollinators and may run off into water supplies, it is not systemic. As a result, despite its presence as a seed coating, it does not make its way into the pollen and nectar that bees forage, and researchers evaluated the bees under the expectation they would only be exposed to clothianidin.

Observations began by following a female bee from nest to forage and back, but this became too time consuming. As a result, the approach was shifted to observations on the time it took the first female pollinator out of the nest to visit 10 different flowers. Researchers also specifically observed strawberry plant visitation over the course of two minute intervals, which included 34 different sessions over the course of 5 days. At the end of the experiment, strawberries were harvested when completely red and weighed. Canola plants were removed and tested to confirm the presence of clothianidin.

Data analysis shows no significant difference in foraging during the first stage of the experiment, but this changed when observations focused on time to forage 10 flowers. Bees feeding on canola that had been seed-treated with neonicotinoids foraged 10% slower than those in the unexposed canola cages. There were also outliers where exposed bees took nearly triple the average time to visit 10 flowers.

In addition to slowing the bees rate of forage, strawberry harvests were recorded to be between 8 and 13% lower in cages were bees foraged on neonicotinoid exposed canola. “We studied bees that ingested clothianidin, a pesticide that was previously used in rapeseed to control flea beetles. Our study indicates that the substance made the bees slower and impaired their ability to pollinate the strawberry flowers,” said Dr. Herbertsson.

Scientists also found that as females constructed nests, more than one third of those in exposed cages did not seal their nest hole with mud, a common practice for the species. All but one nest in the control cages performed this action.

Impaired pollination associated with neonicotinoid exposure has been recorded in past research, adding weight to the study results. A 2015 paper in Nature found that bumblebees exposed to thiamethoxam visited apples less often and collected less pollen when they did. Critically, this resulted in apples with fewer seeds. Likewise, research published in 2016 in the journal Functional Ecology found that neonicotinoid exposure altered bumblebee foraging behavior of wild plants, affecting their ability to learn how to extract nectar and pollen, and causing them to take longer to do so. Â

While decreases in foraging efficiency may not seem significant at first glace, extrapolating these data alongside real-world observations brings the problem into sharp contrast. In 2020, a study in the Proceedings of the Royal Society B found that wild pollinator declines in the U.S. are already limiting crop production. This problem is quantifiable â€“ with researchers finding the value of wild pollination services at $1.5 billion annually, with all pollinator-dependent crops totaling $50 billion each year. At the global scale, production of crops dependent on pollinators is worth between $253 and $577 billion. Even these numbers mask the true extent of how precarious a world with fewer, and less efficient pollinators would be. According to research published in PLOS One in 2015, such a world would be subject to rampant malnutrition. As lack of pollination reduces crop yields, access healthy crops like strawberries, apples, and others is likely to become accessible only to the wealthiest individuals in a given region.

We can avoid these worst case scenarios by making sure our leaders take this research seriously, and act upon these real and present risks. It is unacceptable for the U.S. to be a straggler on this issue, failing to meaningfully restrict neonicotinoids while the European Union eliminated them in 2018. As U.S. regulators and politicians fret over short-term impacts to farmers from the loss of a chemical tool, we are piece by piece losing our long-term ability to produce healthy, nutritious food. The Saving Americaâ€™s Pollinators Act would address the pollinator crisis by eliminating neonicotinoids and establishing a board of experts without chemical industry influence to review pesticides for their impacts to pollinator health or habitat. Despite being introduced each year now for roughly a decade, and consistently attracting dozens of co-sponsors, members of the House Agriculture committee have still not even given the legislation a proper hearing. Help build momentum for this bill in Congress by urging your Representative to take action before it is too late.

This entry was posted on Wednesday, September 21st, 2022 at 12:01 am and is filed under Clothianidin, Cyfluthrin, Environmental Protection Agency (EPA), neonicotinoids, Pollinators, Uncategorized. You can follow any responses to this entry through the RSS 2.0 feed. You can skip to the end and leave a response. Pinging is currently not allowed.