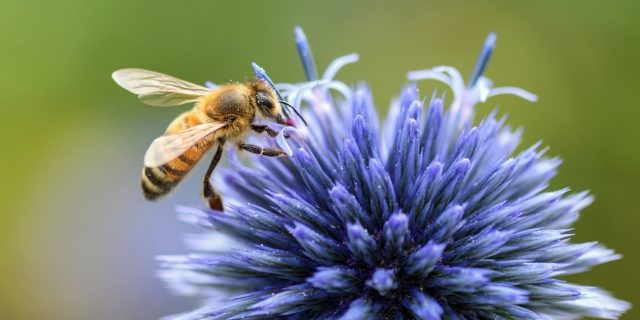 (Beyond Pesticides, November 1, 2022) Honey bees exposed to a combination of multiple pesticides suffer a reduced lifespan and experience adverse changes to their gut microbiome, increasing susceptibility to pathogens and disease. This finding comes from a study published recently in Science of the Total Environment, which examines the interactions between the insecticides flupyradifurone and sulfoxaflor and the fungicide azoxystrobin on honey bee health. Both insecticides studied are considered substitutes for notorious bee-killing neonicotinoid insecticides, which move through the vascular system of the plant and contaminates its pollen, nectar, and guttation droplets. As declines in pollinator and insect life continue throughout the world, it is critical not only to understand and restrict widely used chemicals like neonicotinoids, but also the regrettable and deleterious substitutions the agrichemical industry has developed to replace them. As the present study reveals, pesticide risk assessments do not inadequately capture the range of harm that can result when pesticides are combined, necessitating a shift toward safer, alternative, and regenerative organic farming systems that do not use these dangerous chemicals.

To better understand the impacts of combined pesticide exposure on honey bees, researchers employed three colonies located in Germanyâ€™s Martin Luther University that were inspected and free of mites and viruses. Technical grade versions of each pesticide were used, eliminating additional confounders that could occur in consumer use products that also include â€śinertâ€ť (non-disclosed) ingredients. Â

Bees were exposed to field relevant levels of each pesticide per U.S. Environmental Protection Agency (EPA) data, as well as combinations of pesticides, (specifically: flupyradifurone plus azoxystrobin and sulfoxaflor plus azoxystrobin) for a period of 10 days through sugar water. A separate experiment on the honey bee gut microbiome was constructed using newly emerged bees, which were housed and reared separately, and then exposed to a similar pesticide treatment as the initial experiment. An unexposed control group of honey bees was included in each experiment. “Our approach was based on the realistic concentrations that might be found in pollen and nectar from plants that have been treated with the pesticides,” says study coauthor Yahya Al Naggar, PhD, of Martin Luther University.

While direct mortality is disturbing, the pesticide induced alterations inflicted on the bees’ guts are a more insidious problem. Impacts to the gut are not seen within the first five days after pesticide exposure, but significant shifts did occur between days five and 10. At this time, treatments of flupyradifurone alone and in combination with azoxystrobin, as well as treatments of sulfoxaflor alone and in combination with azoxystobin show significantly increased abundance of Serratia spp. This rod-shaped bacteria can serious harm honey bee fitness. “These bacteria are pathogenic and harmful to bees’ health,â€ť said Dr. Al Naggar. â€śThey can make it harder for the insects to fight off infection, leading to premature death.â€ť Â

The ability for insecticides alone and in combination to cause delayed gut dysbiosis in honey bees is not an effect that an EPA pesticide risk assessment would ever capture under current data requirements. EPA requires very basic screening level tests initially, and more detailed tests only if these tests indicate a need. Yet in context, while any testing is better than none, many advocates question the value of EPA protocols when initial screening is so lackluster. Case in point, both flupyradifurone and sulfoxaflor have been marketed by the agrichemical industry as â€śsafer for bees,â€ť despite having effectively the same mode of action as bee-killing neonicotinoids. And data since their EPA registration has backed up the concerns of pollinator advocates. In fact, EPA was sued over its approval of sulfloxaflor, and rather than accept the courtâ€™s decision to vacate the chemicalâ€™s registration, EPA went ahead and registered the chemical again. As a result, beekeepers and conservations groups are back in court yet again to stop this bee-killing decision. With flupyradifurone, this is now the second study showing that the chemical causes signficantly more harm to bees when used in combination with a fungicide. Per a 2019 study, combinations of flupyradifurone and the fungicide propiconazole resulted in 73% mortality and increased abnormal behavior among exposed bees. Despite these concerns EPA has facilitated the expanded use of the chemical. Â

The combined impacts of different pesticides and how they may adversely affect the gut microbiomes of the animals we rely on to pollinate our food is something EPA should be at the cutting edge of investigating. Yet, the agency has consistently refused to implement measures that would investigate, let alone address these risks. As a result, more and more advocates, communities, and states are taking action to protect their pollinator populations. While many advocates and communities are embracing organic land care and eliminating all toxic pesticides, many states have merely restricted the neonicotinoids, permitting use of flupyradifurone, sulfoxaflor, and other equally harmful substitutes to continue. To meaningfully address the pollinator crisis, we need a team of pollinator experts to review the science and make recommendations to EPA. That is what the Saving Americaâ€™s Pollinators Act would accomplish. Help bring this law into force by taking action today and telling your member of Congress to join in as a cosponsor.

For more information on the dangers pesticides pose to pollinators and what you can do see Beyond Pesticides Bee Protective webpage.

This entry was posted on Tuesday, November 1st, 2022 at 12:01 am and is filed under Agriculture, Environmental Protection Agency (EPA), Fungicides, Microbiome, Pollinators, Uncategorized. You can follow any responses to this entry through the RSS 2.0 feed. You can skip to the end and leave a response. Pinging is currently not allowed.