(Beyond Pesticides, June 16, 2014) As pollinator week begins, the critical importance of pollinators is exemplified in a recent study out of the University of California, Berkeley. Not only do pollinators help increase crop yields, they may be even more important than fertilizers, Â according to Â the study suggests. 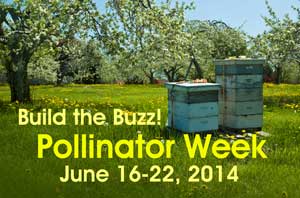 Ecologist Alexandra-Maria Klein, Ph.D. and her colleagues at UC Berkeley found that when there is a lack of pollination, via bees and other pollinators, there is a stronger reduction in harvest yields than when there is a lack of either fertilizer or sufficient water for the crops. Their results, which were published in the journals Plant Biology and PLoS ONE, found that when crops were pollinated, the plants bear more fruit along with a change in their nutrient content.

Dr. Klein and her team observed the effects that different conditions and treatment combinations had on almond trees. The conditions involved: preventing bees from pollinating blossoms via cages, allowing the bees to pollinate the blossoms, or pollinating the blossoms by hand. Additionally, researchers combined these conditions with four different treatments: watering and fertilizing the trees according to local practices, reduced watering, no fertilization, or reduced watering with no fertilization. In the case of several almond trees, they combined the various manipulations in order to study in isolation and in combination the effects on harvest yield and the composition of nutrients in the nuts. The almond trees that were pollinated by hand produced the most nuts, but they were very small. Conversely, a tree that was left un-pollinated produced very few nuts, although the ones that it did produce were very large. The trees pollinated by bees had an approximately 200 percent higher yield than the trees that had self-pollinated.

Fertilization and watering had an effect on harvest yield only when combined with the pollination manipulations. However, when trees were insufficiently watered, they lost more leaves, and the leaves of unfertilized trees increasingly turned yellow.

Based on these results, scientists concluded that an almond tree can compensate for the lack of nutrients and water in the short term by storing the nutrients and water in the fruits instead, but cannot compensate for insufficient pollination. Scientists also found that the nutrient composition varied according to the mode of pollination. Nuts from self-pollinated trees had a lower proportion of linoleic acid, but a higher proportion of vitamin E.

Honey bees and other pollinators have been experiencing a rapid and ongoing population decline in the U.S and other parts of the world since 2006. This has a profound impact on the stability of ecosystems, the economy, and our food supply. A May 2013 report by USDA found that one in three bites of food depends on pollination, mainly by honey bees, and that pollination is valued at $20 to $30 billion annually.

The results of Dr. Kleinâ€™s study continue to emphasize the important role that pollinators play in our daily lives. As a result, convincing the government to restrict the use of an increasingly popular class of pesticides, called neonicotinoids, has become more important than ever. You can help Beyond Pesticides put the pressure on retailers, administrators, and policy makers by visiting our BEE Protective page. You can also learn more about the basic facts behind honey bee declines here and Beyond Pesticidesâ€™ report summarizing the science behind these declines here.

Donâ€™t forget – Pollinator Week begins today! Check out our post last Friday detailing all the different festivities hosted by Beyond Pesticides and allies throughout the next seven days. You can help us kick off Pollinator Week today with an Online Town Hall at 9 p.m. EST/6 p.m. PST with your RSVP here. We hope to see you there!

This entry was posted on Monday, June 16th, 2014 at 12:01 am and is filed under Agriculture, California, Events, Lawns/Landscapes, Pollinators, State/Local, Take Action. You can follow any responses to this entry through the RSS 2.0 feed. You can skip to the end and leave a response. Pinging is currently not allowed.