(Beyond Pesticides, September 23, 2016) The U.S. Fish and Wildlife Service (FWS) has proposed listing the rusty patched bumble bee as an endangered species under the Endangered Species Act (ESA). This is a victory for environmental groups who have fought to protect the rusty patched bumble bee from widespread threats such as habitat loss and pesticide use. The FWS proposal opens a 60-day public comment to allow agencies, groups and interested people to comment and provide new information. The public comment period is open through November 21, 2016. You can submit comments soon by visiting the docket, here. 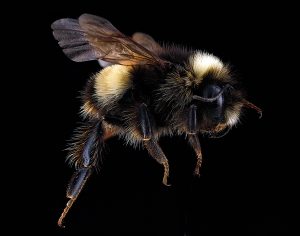 According to FWS, the rusty patched bumble bee was once widespread across the United States and parts of Canada, but declined dramatically in the 1990s. Their populations dwindled and have declined by 91 percent. FWS acknowledged ┬áthat the bumble bee populations considered for this proposal have not been reconfirmed since the early 2000s, meaning that currently there may be even less of the species left. Threats to the rusty patched bumble bee include diseases introduced by commercial bumble bees that are not free of pathogens and are released near wild populations. Climate change plays a part, along with habitat loss from industrial agriculture and other modernization that decreases wild lands. There is also an overwhelming amount of research demonstrating that neonicotinoids insecticides, working either individually or synergistically, play a critical role in the ongoing decline of bees and other pollinators.

Neonicotinoids affect the central nervous system of insects, resulting in paralysis and eventual death. These pesticides have consistently been implicated as a key contributor ┬áin pollinator declines, not only through immediate bee deaths, but also through sublethal exposure that causes ┬áchanges in bee reproduction, navigation, and foraging. Pesticide exposure can impair both detoxification mechanisms and immune responses, rendering bees more susceptible to viruses, parasites, and other diseases, and leading to devastating bee losses.

In 2015, a study coauthored by Christopher Connolly, Ph.D., with the University of Dundee, found that bumble bees exposed to field-relevant levels (2.1 parts per billion) of the neonicotinoid insecticide clothianidin suffer poor navigation and foraging skills. Clothianidin exhibits an acute effect on the bumble beeÔÇÖs brain, breaking down the mitochondria in its brain cells. At the time, Dr. Connolly stated, ÔÇ£Our research demonstrates beyond doubt that the level of neonicotinoids generally accepted as the average level present in the wild causes brain dysfunction and colonies to perform poorly when consumed by bumble bees.ÔÇØ

In another study, ┬áSeed coating with a neonicotinoid insecticide negatively affects wild bees, Swedish scientists reported that wild bees and bumble bees foraging in crops treated with a commonly used insecticide seed coating, a combination of the neonicotinoid clothianidin and the non-systemic pyrethroid ├Ä┬▓-cyfluthrin, are ┬áless likely to reproduce when compared to bees in untreated fields, and that bumble bee colonies in treated fields gain less weight. Additionally, fewer wild bees and bumble bees are found in treated fields than in untreated ones.

While it is a victory that FWS has proposed to list the rusty patched bumble bee as an endangered species, other agencies continue to lag behind when it comes to addressing the threat of pesticides to pollinators. In March 2016, a U.S. Government Accountability Office (GAO) report concluded that U.S. regulatory agencies are falling short in addressing the multiple threats contributing to declining pollinators. The GAO report recommends that the U.S. Department of Agriculture (USDA) increase the monitoring of wild, native bees, while U.S. Environmental Protection Agency (EPA) efforts thus far on ┬ápesticide restrictions (label amendments and restrictions) have been limited and accomplished little to change pesticide exposure patterns to pollinators. GAO identified the need for EPA to develop a plan to assess pesticide risks to a range of bee species beyond honey bees, as current EPA evaluations only use honey bees as a surrogate for wild bee species. ┬áFurther, the report finds that the impact from exposure to chemical mixtures also needs to be investigated.

Similarly, in February, a United NationÔÇÖs assessment of pollinators and the global food supply warned that many species of wild bees, butterflies, and other pollinators are on a dangerous path toward extinction, further threatening the ┬áfood supply if the human-made causes of these declines are not halted. The assessment found that an estimated sixteen percent of vertebrate pollinators are threatened with global extinction.

For these reasons and many others, Beyond Pesticides works to promote the widespread transition of conventional farmland to organic production. Organic law requires farmers to foster soil health, and create a strategy to deal with pest populations before they become a problem. Because of these factors, many organic farms do not require the use of even organic-compatible pesticides, opting instead to increase pest and disease resiliency through an increased diversity of pest predators.

With one in three bites of food reliant on bees, other insects, and birds for pollination, the decline in pollinators due to pesticides, and other human-made causes, demands immediate action. For more on this and what you can do to protect pollinators, visit Beyond PesticidesÔÇÖ ┬áBEE Protective webpage.

For further information about the decline of the rusty patched bumble bee, you can watch A Ghost in the Making, a short film about the species disappearance.

This entry was posted on Friday, September 23rd, 2016 at 12:00 am and is filed under Uncategorized. You can follow any responses to this entry through the RSS 2.0 feed. You can skip to the end and leave a response. Pinging is currently not allowed.