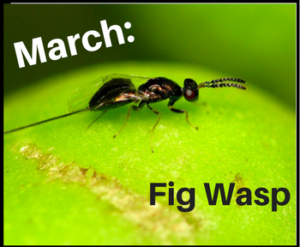 (Beyond Pesticides, March 1, 2017) The Fig wasp is the pollinator of the month for March. A highly evolved pollinator crucial to the life cycle of the fig tree, the fig wasp is part of the chalcidoid family. Within this classification, it is a member of the agaonidae sub family, which consists of both mutualistic pollinating, and parasitic, non-pollinating, fig wasps.

Fig wasps have a mutually beneficially relationship with fig trees, as both the tree and the wasp rely on each other for reproduction. According to the Encyclopedia Britannica, there are about 900 species of pollinating fig wasps that are responsible for pollinating 900 different fig tree species. The relationship between fig trees and fig wasps is so evolved that each type of fig wasp pollinates only one specific type of fig tree, creating a beautiful and interdependent evolutionary partnership.

Range
The range of the fig wasp is dependent on the range of fig trees, which, according to the Encyclopedia of Life, are mainly found in the tropical and subtropical areas of the southern hemisphere. The most widely known fig tree, the common fig tree, or Ficus carica, is native to southwest Asia and the Mediterranean, and range anywhere from Afghanistan to Portugal. The strong demand and high commercial value of the fig fruit has led to the naturalization of the common fig tree in additional parts of the world that have the requisite mild and semi-arid climate required for the species to grow. California, Oregon, Texas, Utah and Washington all commercially produce the common fig tree.

Western consumers predominately eat figs from the common fig tree. This is due largely to the fact that this variety does not require pollination to the same extent as other fig species, making them easy to grow at home or in climates without naturally occurring fig wasp populations. However, there are two species of fig wasps that have been introduced in North America, which are typically used to pollinate the commercially valuable Smyrna fig.

Diet, Pollination, and Life Cycle
The fig wasp exclusively coexists with fig trees, which makes the fig fruit their primary source of nutrition. In order to understand the diet and method of pollination of the fig wasp it is important to understand their life cycle, which is heavily intertwined with the fig fruit. Fig wasps can be separated into two different groups, pollinating and non-pollinating, each of which plays an important role in the life cycle of a fig. Pollinating wasps provide a mutually beneficial service to the trees in the form of pollination, while non-pollinating wasps use the plant as a source of food, and often act as a parasites to either the fig plant or the pollinating wasps.

The first stage in the fig waspâ€™s life cycle occurs when a female fig wasp first enters an unripe fig fruit through a small opening known as the ostiole, and travels to the synconium, or inner part of the fig fruit, which contains both male and female flowers. Once inside, she will lay her eggs in the shorter flower structures. The longer flower structures remain unfertilized and eventually develop into the seeds you see inside of a fig. While laying her eggs, the female fig wasp inadvertently pollinates the female flowers found inside the fig fruit by transferring traces of pollen particles from the fig fruit in which she originally hatched. Once their eggs are laid, female fig wasps die within the fig.

As the fig fruit and the eggs mature, male wasps hatch and emerge from their eggs, known as galls, traveling within the fruit towards the synconium in search of females to fertilize. After doing his part to fertilize the female, a male fig wasp will begin digging escape tunnels for the females once they hatch, though he will never get to benefit from them himself, as males die within the fig fruit during this process. Because they never leave the fruit in which they were born, male fig wasps do not have wings.

As all of this is happening, the male flowers are maturing and creating pollen for the new batch of female fig wasps to transfer to the next fig fruit. Once the female hatches she makes her way through one of the escape tunnels dug by the males, picking up pollen from the male flowers in the process. With pollen now in tow via her body, the female emerges in search of a new fruit to lay her eggs in, pollinating another fig in the process and starting the cycle all over again. It is through this process that the highly specialized and enclosed flowers within the figs are pollinated, further demonstrating the interdependence between the life cycle of the fig wasp and the fig tree.

Physiology
Physical differences from one species to the next due to coevolution with their host fig tree species. Despite this highly evolved individuality, fig wasps do share some general some characteristics across the species.

Female fig wasps are larger in size than male fig wasps and, as mentioned above, females have wings while males do not, as they do not leave the fig within their life cycle. However, because one of their primary roles is to create tunnels for female wasps to exit the fig, male fig wasps have strong, specialized mandibles built to chew through the figâ€™s tough outer flesh. Females, on the other hand, are equipped with wings to travel to another fig tree or fig fruit to lay eggs.

According to the Encyclopedia of Life the female fig waspâ€™s body has evolved over time to fit into the ostiole of the fig.Â  There are special appendages on her head that help her body inch through the tight opening on the fig.Â  Additionally, some species of female fig wasps have evolved to have an extremely long ovipositor, the body part responsible for laying eggs.Â  This allows the female to lay her eggs from the outside of the fig without entering and trapping herself within the fruit.Â  Fig wasps have very short life spans, living only between 1-2 days once hatched from their eggs.

Ecological Role
Fig wasps may seem like a menial pollinator given that they only pollinate one type of plant, but that is far from the case!Â  The fig wasp is an integral species, as the fig tree has been identified as a keystone species in tropical rainforests where they help maintain the population and diversity of a variety of species. The Encyclopedia of Life defines a keystone species as â€śa species within the ecosystem that exerts a major influence on the composition and dynamics of the ecosystem of which it lives.â€ť This means that the fig tree is a species that has a disproportionately large effect on its environment, relative to its abundance within the ecosystem.

Many species rely on the fig fruit and its leaves as their main source of nutrients.Â  The Encyclopedia of Life lists the fig as a key resource for many fruit eating animals including fruit bats, several species of monkeys, and a plethora of birds.Â  Insects like caterpillars, moths and beetles all feed on the leaves of the fig tree. In fact, over 1,200 different species of birds and mammals have been recorded to eat fig fruits.

Threats to Existence and How to Protect Species
Currently, the fig wasp and the fig tree are not in immediate danger, however some scientists are concerned that climate change and global warming could have a negative impact on fig wasp populations. In a study done in Singapore in 2013, researchers studying fig wasps discovered that fig wasp survivability drastically reduced in climates that were warmer than their desired habitats. More extreme climates could threaten the productivity of fig wasps, possibly causing a decline in fig tree populations. Fig wasps are considered by researches to be resilient insects, having lived through planetary temperature changes over the past 60-80 million years. They hypothesize that as climate change continues to intensify, the insects will alter their behavior in order to adapt to warmer climates. However, if the changes in temperature take place too quickly for these adaptations to occur, it could conceivably threaten the existence of the fig wasp.

Tropical rainforest deforestation also poses a threat to fig wasps. As human development and agricultural activity continues to expand, forests around the world are being cleared at alarming rates, especially in developing countries where most of the worldâ€™s tropical rainforests are located. Fig trees and their companion pollinators are incredibly important to rainforest ecosystems, as they provide a popular source of food and attract seed dispersing animals.

There are a few things that can be done within your community to protect and foster fig wasps and fig tree populations. For starters, if you live in an area with an appropriate climate, consider planting a fig tree in your yard, garden, or community! The next vital step in protecting fig wasps and fig trees is to avoid the use of pesticides in your community. You should be aware of the chemicals used in your gardening solutions and avoid buying products that that contain neonicotinoids, a class of chemicals linked to pollinator declines. Neonicotinoids are systemic by nature, and if sprayed near a fig tree could be transported through the roots into the flower of the plant, threatening the fig wasps who live inside. For more information on the impact pesticides have on non-target organisms, read Beyond Pesticidesâ€™ report on Bees, Birds, and Beneficials, which can be found here.

Switching to organic approaches to prevent and control pests around your home and garden is the best way to protect the health of pollinator populations in your community. For more information on how you can get involved in pollinator conservation throughout the nation, see Beyond Pesticides BEE Protective webpage.

What is Polli-NATION?
When it comes to pollination, bees tend to get all of the buzz. While they are crucial to pollinating many crops, bees are not the only pollinators working hard to provide the ecosystem services critical to the food system. In fact, one out of every three bites of food is made possible by pollinators. In order to raise awareness for the unsung pollinator heroes, Beyond Pesticides created the Polli-NATION Campaign, which highlights the important work of a relatively unknown pollinator each month, including butterflies, wasps, flies, beetles, birds, bats, and more. The campaign raises public awareness about these pollinators, their contribution to plant health and productivity and the preservation of natural resources, and the threats they face in their daily lives, including toxic pesticides and habitat loss. Learn what you can do in your community to help ensure their survival of all the pollinators.

All unattributed positions and opinions in this piece are those of Beyond Pesticides.Â

This entry was posted on Wednesday, March 1st, 2017 at 12:00 am and is filed under Beneficials, Biodiversity, Habitat Protection, Pollinators, Uncategorized. You can follow any responses to this entry through the RSS 2.0 feed. You can skip to the end and leave a response. Pinging is currently not allowed.