(Beyond Pesticides, June 2, 2017) According to a new study, levels of triclosan spike in the bodies of children after they brush their teeth or wash their hands. Triclosan, a controversial antimicrobial, is frequently added to consumer care products. Last year, the Food and Drug Administration (FDA) banned the use of triclosan in hand soaps, but it is still allowed in toothpaste and numerous plastic and textile products regulated by the U.S. Environmental Protection Agency (EPA). Many companies had previously decided, due to consumer pressure, to remove triclosan from hand soaps years ahead of the FDA decision. 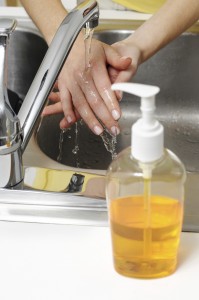 Researchers collected and tested the urine of 389 mothers and their children â€“three times during pregnancy, and then took between 1-6 samples from children between the ages of 1 and 8 years old. The researchers found triclosan in over 70% of samples taken. In the group of 8 year olds, they report that levels were 66% higher in the children that used hand soap. For those that wash their hands over five times a day, the levels increase more than four times in comparison to children who wash their hands once or less per day. For toothpaste, researchers find that children who had brushed their teeth and then been tested within 24 hours had concentrations of triclosan that were 167% higher than those who had not brushed their teeth in the last 24 hours.

Assistant Professor in Brown University’s Department of Epidemiology in the School of Public Health Joe Braun, PhD of Brown Univesity, the senior author of the study, discussed with Environmental Health News why the study was done and how exposure to triclosan at a young age can affect development. Dr. Braun stated, â€śThereâ€™s very little data on the exposure in those first years of life. There are a lot of behavioral changes in those years, and environmental chemicals can play a role.â€ť A previous study,Â which Dr. Braun co-authored, was released in April, and the researchers found that triclosan exposure during pregnancy was linked to lower birth weights, smaller heads, and earlier births.

Triclosan has been used for over 30 years in the U.S., mostly in a medical setting, but more recently in consumer products. Numerous reports have increasingly linked triclosan to a range of adverse health and environmental effects from cancer and endocrine disruption, bacterial and compounded antibiotic resistance, to the contamination of water and its negative impact on fragile aquatic ecosystems. Beyond Pesticides has catalogedÂ extensive documentationÂ of the potential human and environmental health effects of triclosan and its cousin triclocarban.

Meanwhile, EPA, which has jurisdiction over non-cosmetic consumer products containing triclosan (microban), continues to allow the use of this hazardous chemical in numerous plastic and textile products, from toys, cutting boards, hair brushes, sponges, computer keyboards to socks and undergarments. Beyond Pesticides previously petitioned EPA for the cancellation of registered products that contain the antibacterial pesticide. In May 2015, EPA issued its long-awaited response to the petition filed by Beyond Pesticides and Food & Water Watch, denying the request. The agency did, however, grant one request, and will evaluate and conduct a biological assessment of the potential for effects on listed species under the Endangered Species Act (ESA) in the ongoing triclosan registration review.

In the past, public pressure, led by Beyond Pesticides and other groups, has contributed to growing awareness of the dangers of triclosanâ€™s use. As a result, several major manufacturers took steps to exclude the chemical before the FDA decision, including Johnson & Johnson,Â Procter & Gamble and Colgate-Palmolive, which reformulated its popular line of liquid soaps, but continues to formulate TotalÂ® toothpaste with triclosan. Minnesota became the first state to ban the toxic antibacterial, announcing that retailers would no longer be able to sell cleaning products that contain triclosan, effective January 2017. In June 2015, the agency responsible for chemical oversight in the European Union announced that the triclosan is toxic and bioaccumulative, and will be phased-out for hygienic uses and replaced by more suitable alternatives. According to the European Chemicals Agency (ECHA), â€ś[N]o safe use could be demonstrated for the proposed use of triclosan.â€ť

What Can You Do?

The best way to protect yourself and your family is to be conscious of labels when buying products. Be sure to read the ingredients when purchasing toothpaste and hand soap. When purchasing home products, you can research whether or not they contain triclosan (or microban). If you are interested in taking steps to rid triclosan from your community, there are a few things you can do. Encourage your local hospitals, schools, government agencies, and businesses to use their buying power to go triclosan-free, or follow the lead of Minnesota and New York by introducing a ban on triclosan. Additionally, organizations canÂ adopt Beyond Pesticidesâ€™ model resolution, which commits them to not procuring or using products containing triclosan. For additional information and resources on the human health and environmental effects of triclosan, join theÂ ban triclosan campaign and sign the pledge to stop using triclosan today.

This entry was posted on Friday, June 2nd, 2017 at 12:01 am and is filed under Antibacterial, Birth defects, Children/Schools, Endocrine Disruption, Triclosan. You can follow any responses to this entry through the RSS 2.0 feed. You can skip to the end and leave a response. Pinging is currently not allowed.