(Beyond Pesticides, June 1, 2017) The hawk moth is the pollinator of the month for June. Hawk moth is the common name for Sphingidae, a family of over 1,400 moth species. They are also commonly referred to as sphinx moths. This family is divided into two subfamilies, five tribes, and 205 genera. The voracious tomato hornworms and tobacco hornworms are larvae of two hawk moth species. 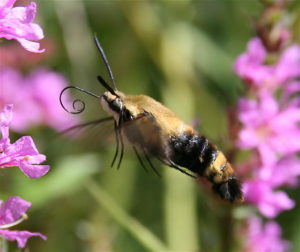 According to a study by the University of Nebraska, hawk moths can be found in all parts of the world except Greenland. Some areas only host these moths for part of the year because many species make seasonal migrations to find reliable food sources and to breed. The study notes that some hawk moth species can even be found in Antarctica and the North Pole.

The hawk moth drinks nectar from sweet-smelling flowers, many of which bloom at night. Most hawk moth species have a long proboscis. This hollow, tongue-like appendage is used to access nectar deep inside flowers. The family has the longest tongues in the moth and butterfly order. In some species, the proboscis reaches over a foot in length. These impressive tongues allow the moths to feed on and pollinate the deepest flowers.

The adults contribute to pollination in a manner similar to many other pollinators. Pollen sticks to the mothâ€™s face, proboscis, and legs when it feeds. It then transports the pollen to successive flowers. A 1995 study at University of Massachusetts, Boston on the speed of hawk moths noted that the family uses a hovering method, similar to that of hummingbirds, while feeding on flower nectar. Additionally, tobacco, tomato, and other nightshade species play host and food source to the hawk moth larvae.

The USDA Forest Service notes that some of the largest moths in the world belong to the sphingidae family. Moth size varies by species, but the largest can have wingspans over ten centimeters. Hawk moths are fast and powerful flyers. The University of Massachusetts, Boston study found one species capable of flying at a speed over twelve miles per hour.Â  They have four long and narrow wings that they use to travel great distances in search of food and in annual migration. The University of Nebraska study reported that off-shore studies have been conducted that attracted moths for study with ship lights as many as sixty miles from land.

The many hawk moth species vary in color and pattern. Their bodies are covered in narrow scales, similar to a mammal fur, which act as insulation to maintain a high temperature. They have been observed â€śshiveringâ€ť in a similar manner to mammals in low temperatures.

Science Magazine reports that the hawk moth is among a number of insects that use their antennae as gyroscopes to maintain stability in flight. The antennae allow the moth to sense rotations, which are adjusted for by the four wings.

The hawk moth plays an important role as both a pollinator and prey. As previously mentioned, the hawk moth pollinates as it feeds on flower nectar. Moth pollination is important for night-blooming plants, which are not readily serviced by daylight pollinators like bees. Additionally, the University of Nebraska study notes that hawk moths and their larvae are prey to birds, bats, small mammals, and even other insects. Their vulnerability to predation has resulted in the evolution of protective mimicry â€“as in the appearance of the bumblebee hawk moth and the inflatable snake head on the tail of Hemeroplanes triptolemus larvae.

The hawk moth, as a large family of moths, is not endangered. Its broad speciation and range indicate the familyâ€™s adaptation to different conditions. However, the International Union for Conservation of Natureâ€™s Redlist lists threats to a couple of hawk moth species. The Prairie Sphinx Moth, native to the United States, has been considered critically endangered since 1996. It faces an extremely high risk of extinction in the immediate future. The Fabulous Green Sphinx Moth of Kauai was considered extinct between 1986 and 2002. However, the moth was observed in limited numbers and noted as â€śdata deficientâ€ť in 2002 before being reclassified as endangered in 2004. It faces a high very high risk of extinction. The most up-to-date assessments identify as threats to this species and the diversity of plants and insects on the island a number of factors, including agricultural development and the plants and animals it brings to the island. Further disturbance, such as hurricanes, exacerbates the problem. The 2015 study Effects of neonicotinoids and fipronil on non-target invertebrates names moths among other beneficial insects as likely to experience â€świde ranging negative biological and ecological impacts.â€ť

How to Protect the Species

The steps you take to protect the hawk moth depend on which species live in your area. Use the Butterflies and Moths of North America Checklist to determine which species of moth are common in your area. The website will also provide you with the information you need to help protect pollinating moths, including their migratory schedule, preferred habitat, caterpillar host plants, and adult food plants. Once youâ€™ve found that information, you can make sure your garden includes flowering plants that are available for nocturnal pollinators.

You can also support the hawk moth family by providing a range of flowers they prefer in your garden. They are particularly fond of petunias, trumpet vine, jimpsonweed, and Queen of the night cactus. These flowers all exhibit strong, sweet fragrance, long floral tubes, and large volumes of nectar. More generally, you can plant white and yellow night-blooming flowers in addition to those previously mentioned.

In addition to providing food and habitat for your local hawk moth species, take measures to ensure your garden is not contaminated with pesticides. Neonicotinoids are a particularly harmful class of pesticides that enter plants, contaminate nectar and pollen, have been documented to decimate non-target insect populations. Avoid introducing plants that have been treated with pesticides, especially neonicotinoids. Read more about the effects of neonicotinoids on our page Chemicals Implicated.

This entry was posted on Thursday, June 1st, 2017 at 12:01 am and is filed under Uncategorized. You can follow any responses to this entry through the RSS 2.0 feed. You can skip to the end and leave a response. Pinging is currently not allowed.