(Beyond Pesticides, January 24, 2018) Poor nutrition coupled with exposure to a notorious class of insecticides known as neonicotinoids act synergistically to significantly reduce the 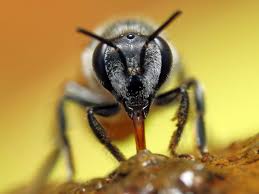 survival of honey bees and their colonies, according to research published by scientists from University of California, San Diego (UCSD). This is the first study to delve into the real-world effects pesticide exposure can have on honey bees also subject to nutritional stress, a common occurrence in the wild. The outcome of this research highlights the weaknesses of the U.S. Environmental Protection Agencyâ€™s (EPA) testing regime for registering pesticides, which does not account for the complex ecology surrounding catastrophic declines in honey bee and other wild pollinator populations.

UCSD scientists looked at two of the most popular neonicotinoids, chlothianidin and thiamethoxam, to investigate how realistic levels of exposure to the chemicals interacted with varying levels of available food. High and low levels of both chemicals, 1/5 and 1/25 of the LD50 (amount at which 50% of honey bees exposed would die) were added to sugar syrup solution containing a range of different nutrition levels. Sugar syrup, which mimics nectar and honey, is a critical source of carbohydrates for honey bees. The bees studied were either allowed to freely forage on sugar solution, or were limited to only a certain quantity of the syrup. Within those two groups, the richness of the sugar solution was broken down to three categories: rich (50% sugar/water), intermediate (32.5% sugar to water), or poor (15% sugar to water). Scientists also investigated honey bee survival based on a no-sugar solution containing only water. All of these scenarios were field-realistic, as honey bees will often go through periods of little to no nutrition at the beginning and end of the growing season, and during winter when honey stores may run out.

The results of the study provide clear evidence of synergistic interactions between nutritional availability and pesticide exposure. In general, bees fed high levels of the neonicotinoids had significantly lower survival rates than both control bees and those fed lower levels of the chemicals in their food. Bees that were limited to only a certain quantity of syrup, whether that syrup contained rich or poor levels of sugar to water, also showed reduced survival. When bees were able to freely forage on sugar solution spiked with insecticide, both intermediate and poor levels of sugar to water reduced survival. In only one instance were significant declines not recorded – when bees were provided rich sugar syrup they could freely forage on. Even when exposed to high or low levels of the neonicotinoids, these bees did not exhibit significantly reduced survival. Even bees fed no nutrients (only water) fared better than those receiving some nutrients spiked with insecticides. Lead author of the study, Simone Tosi, PhD, noted, “Our results provide the first demonstration that these stressors can synergistically interact and cause significant harm to animal survival.”

Of most significance to the ongoing pollinator crisis, the authors note that, when EPA requests studies on the impact of these chemicals on pollinators, it provides what would be classified in the study as a rich sugar solution (50% sugar/water), and allows bees to freely forage on the mixture. Thus, EPAâ€™s tests would never capture the effects recorded in the new study, despite the fact that nutritional stressors are very common in the course of a honey bee and its colonyâ€™s life. “These findings should cause us to rethink our current pesticide risk assessment procedures, which, based upon our findings, may underestimate the toxic effects of pesticides on bees,” said Dr. Tosi.

Outside the ongoing pollinator crisis, the results of the study could conceivably apply to all animals. Co-author James Nieh, PhD, indicated that this research “may have even broader implications beyond honey bees because prior studies have not demonstrated a negative synergistic effect of pesticides and poor nutrition in animals.â€ť

For many, it is likely common sense that a nutrient poor diet coupled with exposure to toxic chemicals leads to reduced survival. However, unless this issue is addressed in honey bees, it could very well be humans that are subject to a similar situation. A study published in 2015 by scientists at the University of Vermont and Harvard University found that the decline of pollinators, and thus pollination services, could lead to a devastating impact on diet and health, particularly for children and women in developing countries. Not only do pollinators contribute to 1 in 3 bites of food, their services help grow the most nutrient-dense fruits and vegetables available on the planet. Without them, diets would be limited to bland foods like corn and grains, with little nutrients- ultimately, as can be inferred from the present study, increasing risk of disease and death.

Stop the ongoing annihilation of pollinator populations by forgoing the use of toxic chemicals in your own yard, and encouraging local, state, and national governments to do the same. Plant pollinator friendly habitat to support existing populations as you work toward pesticide reform goals. Get ideas about what to plant around your home or business through the Bee Protective Habitat Guide, and find pollinator-friendly seeds through Beyond Pesticidesâ€™ Directory. Let us knowÂ  that you are interested in working on this issue by indicating that you want a pesticide-free community today. Plan on meeting one of the authors of this study, Jame Nieh, PhD, at the upcoming 36th National Pesticide Forum, Organic Neighborhoods: For healthy children, families, and ecology, April 13-14, 2018 in Irvine, California.

This entry was posted on Wednesday, January 24th, 2018 at 12:00 am and is filed under Agriculture, Increased Vulnerability to Diseases from Chemical Exposure, neonicotinoids, Pollinators. You can follow any responses to this entry through the RSS 2.0 feed. You can skip to the end and leave a response. Pinging is currently not allowed.