(Beyond Pesticides, March 9, 2018) Milk from 100% grass-fed cows has higher levels of beneficial 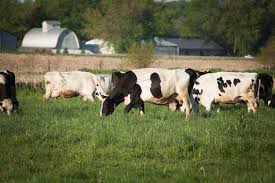 fatty acids than conventional and even organic milk, according to a study published by an international team of scientists in the journal Food Science and Nutrition. The research follows up on data published in 2013, which compared only conventional and organic milk, finding organic milk contained 62 percent more omega-3 fatty acids and 25 percent fewer omega-6s. “Grassmilk farmers have long been telling us that they believed the nutrition of this milk was higher than that of the milk they were producing when they were still feeding grain,” said Logan Peterman, agricultural research and analytics manager at Organic Valley to Wisconsin Public Radio. “We kind of set about to test that question and really make sure that the signal was there, that we could be certain of it, that we were following the correct methods and also that it was sort of refereed by an outside party.”

The study compared the composition of several fatty acids within the three types of milk tested (conventional, organic, and grass-fed). Of primary concern was the ratio of omega-6 to omega 3 fatty acids. Although omega-6s are not necessarily bad fats, high amounts or unbalanced ratios of omega-6 to omega-3s has been linked to a range of health problems, from cardiovascular disease, to cancer and other illnesses. High consumption of omega-3s, on the other hand, is linked to reduced risks of a number of diseases, including diabetes, high blood pressure, high cholesterol, cancer, and many other chronic disorders. The diet of early humans maintained a ratio of 1, but modern Western food production, with its focus on processed and hydrogenated fats, has raised that ratio to an average of 15.

While organic milk producers are required to graze their heard for at least 120 days during the growing season, only 30% of their diet is required to come from grass eaten when pastured, with grains intake permitted. The grass-fed milk in the study was defined as requiring 60% of a cowâ€™s diet from pasture feeding, with nongrazing portion coming from forage-based feeds such as clover, grass hay, or alfalfa; grain and silage are not permitted. Conventional dairies have no such requirement, and are often fed silage from genetically engineered grains, which are not allowed in either grass-fed or organic dairy operations.

The research also found that, given limited fatty acids in the typical Western diet, switching to grass-fed milk could decrease an individualâ€™s omega-6 to omega-3 intake ratio by as much as 8 points and potentially decrease the risk of certain diseases. Although the researchers acknowledge the benefits of fish and shellfish as a major source of beneficial fatty acids, past studies show the majority of Americans do not consume enough or any oily fish. Moreover, grass fed milk can supply certain omega-3s that fish oils cannot, and vice versa, indicating that an all of the above strategy may be best.

Co-author of the study Bradley Heins, PhD, of the University of Minnesota points to the potential for organic dairies to receive an additional cost premium for switching to 100% grass feed. â€śWith growing demand for organic dairy products, producers may be able to expand their profitability and market share by converting to grass-based pasture and forage-feeding,â€ť he said to ExpressUK.

While grass-fed and organic milk may cost a bit more, it can be said that consumers purchasing these products are simply paying the â€śtrue costâ€ť it takes to produce this food. The price of conventional milk does not account for the health costs one may pay down the road by missing out on essential nutrients. Nor does it include the environmental pollution caused by confined animal feed operations (factory farms), or adequately consider the well-being of animals producing this food.

Studies consistently back up claims that organic food is more nutrient dense than conventional products. A study published in 2016 by a team of European researchers found organic milk and meat contained 50% more omega-3 fatty acids, as well as slightly higher concentrations of iron, vitamin E and some carotenoids.

It is worth noting that the organic industry has a problem when it comes to the issue of milk production and factory farms. Aerial photographs taken by the Cornucopia Institute in 2014 showed cows in cramped conditions with no access to pasture as required under organic law. These and other issues contributed toÂ an impassioned statement on threats to organic integrity by retiring National Organic Standards Board member Francis Thicke late last year. See also a new technique being developed to verify grass-fed claims.

The good news is that new tools are coming to the market that should allow consumers peace of mind that the cows that produced their milk were grazed on grass, and identify rule-breaking dairies.

For more information about the benefits of organic production, see Beyond Pesticides Why Organic webpage.

This entry was posted on Friday, March 9th, 2018 at 12:00 am and is filed under Agriculture, Alternatives/Organics, Uncategorized, US Department of Agriculture (USDA). You can follow any responses to this entry through the RSS 2.0 feed. You can skip to the end and leave a response. Pinging is currently not allowed.