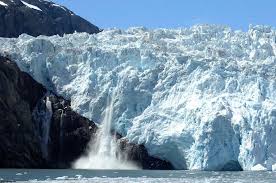 (Beyond Pesticides, December 11, 2018) Meltwater and runoff from Alaskan glaciers contain detectable levels of organochlorine pesticides that bioconcentrate in fish and put individuals at risk, according to a new study from researchers at theÂ University of Maine (UMaine). DDT, lindane, and other organochlorines have been detected throughout the world, even in natural areas thought to be untouched, and pristine. As UMaine scientists show, the atmospheric transport and ubiquitous deposition of these pesticides continues to pose risks to U.S. residents long after regulations banned their use.

Although most of the highly toxic class of organochlorine pesticides like DDT were banned in the early 1970s, some chemicals retained certain uses. Lindane, for example, had its pest management uses phased out gradually until 2007, but is still allowed today as a scabies and lice shampoo. While use of these pesticides has declined in the U.S., much of the developing world, including many Asian countries, such as China, India, and North Korea, still report use. This results in atmospheric transport of the pesticides, and relevant to the UMaine research, increases the likelihood that the chemicals will eventually be deposited onto Alaskan glaciers through snow or rain.

The UMaine research team investigated the amount of DDT and lindane historically and recently deposited into the Jarvis Glacier, located in Eastern Alaska northwest of Juneau. Researchers analyzed glacial meltwater and ice core samples down to the bedrock.

Results found that ice core samples taken between 20 and 45 feet contained the highest concentrations of organochlorines, with concentrations decreasing closer to bedrock. Meltwater generally contains slightly higher levels of pesticides than any ice core sample taken. Although concentrations detected are low and none exceeded 1.12 ng/L, researchers indicate that the risk is not direct exposure, but the bioconcentration of these chemicals up the food chain.

In UMaineâ€™s press release, study coauthor Kimberly Miner, PhD, indicates that even with low levels of organochlorines, both adults and children who regularly consume fish in contaminated streams are at increased risk of cancer, as their consumption levels are likely to exceed EPA thresholds. She indicates that children are particularly vulnerable, and as climate change accelerates the rate of melting, these concerns are only likely to intensify. â€śThis secondary impact of climate change will be felt most strongly by children, and needs to be addressed in a comprehensive way,â€ť Dr. Miner said. Organochlorine contamination not only puts individuals at health risks, it jeopardizes the traditions and subsistence way of life for many Alaskan native peoples, necessitating significant investment in culturally appropriate solutions.

Research published earlier this year links mothersâ€™ DDT exposure to increased rates of autism in their children. In 2016, a similar study found that mothers with organochlorine contamination in the highest 25th percentile had an 80% increased risk of giving birth to a child that develops autism. DDT and its breakdown products are known endocrine disruptors and have been linked to breast cancer, and early menopause. Lindane is considered by the world health organization to be in the highest cancer classification â€“ carcinogenic to humans (Group 1), but, despite this, risk is still allowed for use by the Food and Drug Administration (FDA).

The dangers posed by long-banned pesticides highlights the ongoing deficiencies in regulating persistent pesticides. For example, DDT, though banned for use in the U.S. in 1972, continued to be produced in the U.S. and exported throughout the world into the late 1980s. This is the case with a number of toxic pesticides â€“ banned for use in the U.S., but not for export to other countries. It is incumbent on U.S. lawmakers and regulators to enact protections in a manner that makes us a model for the world, rather than shifting hazards to developing countries. To the extent that we are aware of the hazards of pesticides, have cancelled some or all of their uses, and are aware of a country’s limited capacity to enforce label restrictions on use, training, and protective equipment, it is unconscionable to export hazardous pesticides. As this study reveals, such failures to stop the exportation of hazardous pesticides are likely to come back to harm us in the long run.

For more information on the dangers posed by long-banned pesticides, see Beyond Pesticides Daily News sections for DDT and lindane.

This entry was posted on Tuesday, December 11th, 2018 at 12:00 am and is filed under Alaska, Climate Change, DDT, Environmental Justice, organochlorines, Uncategorized. You can follow any responses to this entry through the RSS 2.0 feed. You can skip to the end and leave a response. Pinging is currently not allowed.