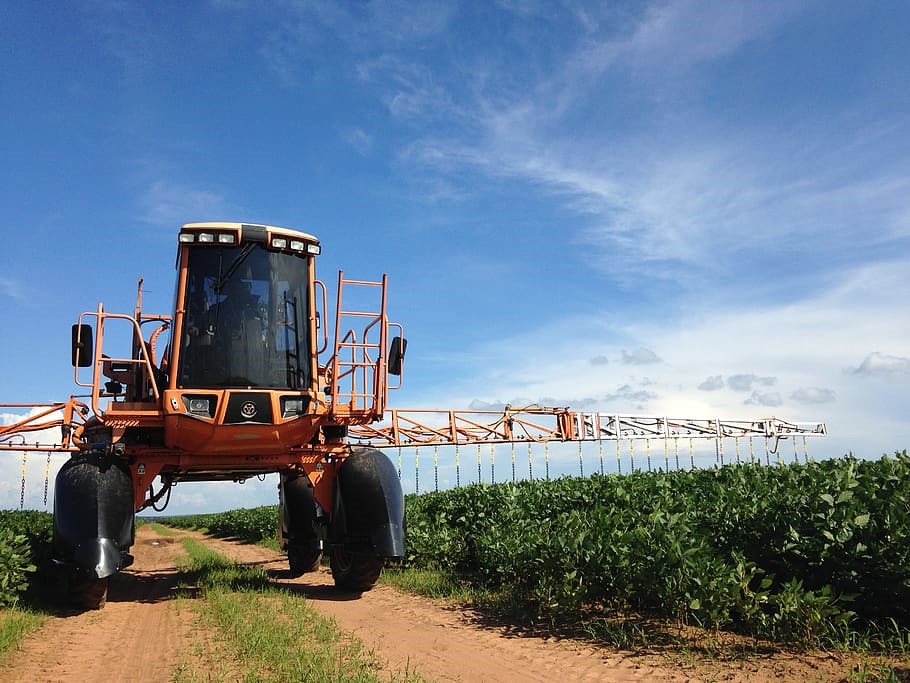 (Beyond Pesticides, February 6, 2020) Bill Bader, a Missouri peach farmer, is taking on agrichemical giants for damages to his crops, allegedly caused by the volatile herbicide dicamba drifting from neighboring properties. Mr. Bader says that not only did he lose over 30,000 trees, his remaining peaches are now smaller and his trees are less productive. According to Bader, the damage has cost him $20.9 million for which he seeks restitution. The case is claiming that Monsanto, now owned by Bayer, and German partner company BASF knew that the sale of their products would result in crop damage due to drift, but sold dicamba-resistant cotton and soybean seeds anyway. The companies deny the claims.

Dicamba is a benzoic acid herbicide that exerts an auxin-like growth regulatory effect when absorbed by plant tissue, ultimately causing the plant to outgrow its nutrient supply and die. Originally developed in the 1950â€™s, dicamba has become more popular as crops become resistant to glyphosate. It is extremely volatile and prone to drift. Soybeans are particularly sensitive to dicamba, and drift damage can pit neighbor against neighbor in rural communities. Risk of crop damage alone can drive farmers to buy dicamba-resistant soybean seeds. In addition to injuring crops, dicamba drift is harming ecosystems and habitat for birds.

The case alleges that Monsanto and BASF understood the sale of genetically modified, dicamba-resistant soybean and cotton seeds in 2015, before the release of a less-volatile version of dicamba in 2017, would cause damage to neighboring farms and potentially drive impacted neighbors to buy the resistant seeds. According to the lawsuit, farmers illegally sprayed BASFâ€™s older versions of the herbicide on resistant crops between 2015-2016.

â€śThe damage occurring was part of the plan,â€ť said plaintiff attorney Billy Randles in an opening statement. â€śThe damage was an essential element of selling this product.â€ť Randles said that Monsanto could not control the product in their own greenhouse pointed to internal company discussions where the defendants â€śso thoroughly anticipated the problemâ€ť that they came up with a term for those who were impacted: â€śdriftees.â€ť

Investigative reporter Carey Gillam noted of the case, â€śBader is only one of a large and growing group of US farmers who say they are the victims of a clearly foreseen chemical catastrophe many years in the making that has ruined crops covering millions of acres of farmland.Â Other lawsuits making similar claimsÂ have been filed on behalf of farmers from Mississippi, Kansas, Nebraska, Illinois, and several other key farming states.â€ť

As a result of these lawsuits, some states likeÂ ArkansasÂ andÂ Missouri have attempted to enact cutoff dates for use to avoid extreme volatility in summer heat. However, many states still lack policies, and those that are in place do not completely prevent the damage caused by drift. Farmers and regulators alike are part of a phenomenon of Â â€śdicamba fatigueâ€ť where the high number of incidents and lack of action related to reporting are driving individuals to stop bothering to report.

Jan Paul Miller, the lawyer who gave Bayerâ€™s opening statement, told the court, â€śThose losses have nothing to do with dicamba sprayed over Xtend seed,â€ť but rather were caused by root rot disease on the farm. The crinkling and curling leaves typically symptomatic of dicamba damage, he argued, are just how peach tree leaves look: â€śThey cup. They curl. Thatâ€™s what peach tree leaves do.â€ť

Additionally, Mr. Miller responded to accusations that Monsanto had not conducted enough testing on its product by pointing to the eventual approval of the product by regulators at the Environmental Protection Agency (EPA). As Beyond Pesticides has regularly said, while EPAâ€™s approval of a pesticide is often used as a defense for the â€śsafetyâ€ť of a chemical, advocates say the highly flawed regulatory system does not conduct adequate testing.

Evidence presented at trial shows that Monsanto employees avoided further testing by University researchers in 2015 by telling them that they did not have enough product. In an email discussed in court last week, a Monsanto employee wrote as he forwarded the email to a fellow member of the technology development team, â€śHahaha difficulty in producing enough product for field testing. Hahaha bullshit.â€ť

Steve Smith, the director of agriculture at worldâ€™s largest canned tomato processor, Red Gold Inc., testified at the trial that Monsanto had many warnings regarding the risk dicamba posed to farmers. Mr. Smith was a member of an advisory council to Monsanto on dicamba. â€śWe told them (Monsanto) over and over again it was not a good idea,â€ť said Smith in an interview with Sierra, â€śThey keep saying itâ€™s a matter of educating the growers. But the problem is not education; the problem is chemistry.â€ť Separately, Mr. Smithâ€™s personal fruit trees were demolished by dicamba drift. Mr. Smith has lobbied for tighter restrictions on the new dicamba system, leading a coalition to act on the issue.

On February 3, the first official from BASF testified via video. Gary Schmitz, tech service regional manager for the Midwest, told the court that, while BASF advised farmers there would be no yield loss related to dicamba drift in 2017, privately the company informed applicators that any drift would cause yield loss.

Mr. Schmitz wrote in an email to another BASF employee, â€śI was always told never to admit guilt.â€ť According to the testimony, he had been making edits to the training document regarding telling investigators to withhold their opinion from potential ‘driftees.’ Mr. Schmitz claimed that even with the cupping symptomology, crops would not suffer yield loss.

In court, Mr. Schmitz still backed that assertion despite record amount of drift cases in the U.S. While Mr. Schmitz admits that BASF received over a dozen complaints from abutting neighbors near production in Shellbyville, IL, he claims that the issue was with the application, not the product. Monsanto executives, similarly, claim that when the product XtendiMax with VaporGrip is applied according to the label, it does not cause any adverse effects.

In contrast to that statement, Dr. Boyd Carey, regional agronomy lead at Bayer, testified last week that, â€śWe anticipated it might happen.â€ťÂ

The trial is likely to extend over the next three weeks.

Given the volatility of dicamba, it is evident that more regulation is needed. Current policies in place must be reevaluated. EPA must begin following the precautionary principle, taking measures to assess for harm before approval. Beyond Pesticides encourages farmers wishing to jump off the pesticide treadmill to adopt organic approaches that do not perpetuate a cycle of pesticide resistance, eliminating the need for these harmful chemicals, mixes of them, and risk of drift. Those impacted by pesticide drift can refer to Beyond Pesticidesâ€™ webpage on What to Do in a Pesticide Emergency, and contact the organization for additional information.

This entry was posted on Thursday, February 6th, 2020 at 12:01 am and is filed under Agriculture, Dicamba, Litigation, Missouri, Pesticide Drift, Uncategorized. You can follow any responses to this entry through the RSS 2.0 feed. You can skip to the end and leave a response. Pinging is currently not allowed.