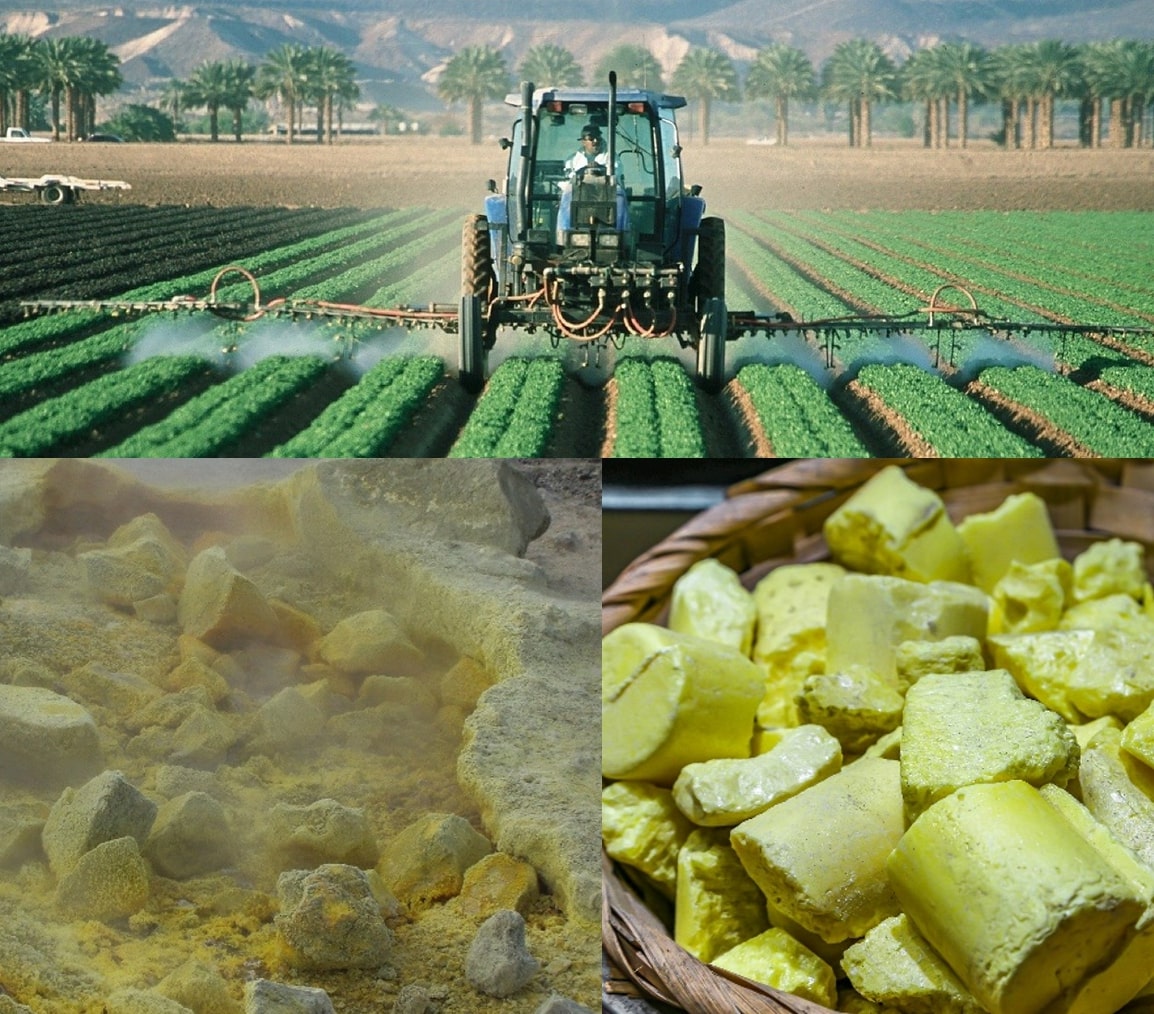 (Beyond Pesticide, August 27, 2020) The latest research finds that pesticides and fertilizers supersede fossil fuels as the greatest contributor of sulfur emissions in the environment, according to U.S. National Science Foundation (NSF)-funded study, published inÂ Nature Geoscience. Particularly, atmospheric sulfur dioxide and reactive sulfur emissions contribute to sulfur deposition via acidic rain and snow, causing a multitude of human and animal of health problems and environmental degradation. Although some U.S. policy regulations curb sulfur emissions from atmospheric sources, alternative sulfur inputs from agricultural sources can cause similar issues as atmospheric sulfur emissions, including acid rain. With peak sulfur concentrations from agricultural outputs up to ten-fold higher than previous 20th-century sulfur levels, studies like these are significant in understanding how underrepresented pollution sources may contribute to overall environmental pollution. Lead author of the study, Eve-Lyn Hinckley, Ph.D., states, “We have an imperative to understand the impact that we’re having on the environment. And then we need to work together towards solutions to mitigate those effects.”

Sulfur is a naturally occurring element found in vast, underground deposits. Although relatively stable underground, it is highly reactive once it reaches the surface, transforming into chemical compounds, like sulfur oxides, upon exposure to oxygen. Over the last century, the extraction and burning of sulfur in fossil fuels, which releases sulfur into the atmosphere, have had unintended, unnatural effects on the environment, including perturbing (disturbing) the sulfur cycle. Fossil fuel power plants (i.e., coal, petroleum, natural gas) contributed to the largest source of reactive sulfur in the atmosphere in the 1960s and 70s, leading to acid rain and ensuing forest and aquatic ecosystems degradation across America. As a result, the U.S. Environmental Protection Agency (EPA) administers the Clean Air Act to regulate air pollution and reduce sulfur levels from atmospheric sources to pre-industrial levels. However, the sulfur cycle perturbation remains high even after the regulating atmospheric sulfur emission as sulfurâ€™s use for crop health and production in agriculture is widespread.

Most research evaluating excess nutrient use in agriculture focuses on nitrogen and phosphorus, which contribute to a plethora of environmental issues, such as greenhouse gas emissions and algal blooms from nutrient runoff. However, there is scant research on the impact of excess sulfur use in agriculture, the risks associated with increased sulfur levels in soil, and how excess sulfur can dampen the natural sulfur cycle. Philip C. Bennett, PhD, program director in NSF’s Division of Earth Sciences, research results,”…illustrate the intertwined nature of natural and human-driven biogeochemical cycles, and reveals new implications of sulfur in our environment, including effects on nutrient availability and runoff, food production and toxic metals.”

According to this paper, each U.S. cropland shows high levels of retained reactive sulfur, with pesticides and fertilizers being the main contributor to environmental sulfur cycle perturbation in croplands. The concentration of sulfur in each cropland region significantly surpasses peak levels of sulfur deposition from past acid rain events. Additionally, areas historically impacted by acid rain, such as the Wild River and waterways adjacent to croplands, have high levels of retained reactive sulfur. This retention is because waterways, such as rivers, were sinks for sulfur, accumulating concentrations of reactive sulfur from acid rain due to its insolubility in water. However, improved air quality regulations and the subsequent decrease in acidic rain events caused reactive sulfur concentration to remain higher in waterways than the surrounding land. Thus, waterways transformed from sulfur sinks to sulfur sources, transporting the element from sulfur-rich water sources to sulfur-limited ecosystems.

Sulfur is an essential nutrient for all organisms, critical for nitrogen uptake by plants and pH balance in the soil, with many crops (i.e., canola, grapes, sugar beets) having a range of sulfur requirements. The use of sulfur as a pesticide or fertilizer is widespread in chemical-intensive and organic farming. Synthetic fertilizers made from fossil fuels are prohibited in organic production, however sulfur as pesticide is permitted as an allowed synthetic input. Although sulfur has theÂ least-toxicÂ effect on human and animal health compared to conventional agrochemicals, manufacturing pesticides or fertilizers using sulfur can still emit harmful sulfur compounds.

According to this research, the use of sulfur-based fertilizers and pesticides has a direct relation to an increase in sulfur concentration for the three croplands. Additionally, areas recovering from past acidic rain evens are seeing an increase in sulfuric concentration. Although air quality regulations decrease the atmospheric deposition of sulfur from fossil fuel mediated acid rain, farmers are now searching for direct sulfur inputs from fertilizers and pesticides that they no longer receive from acid rain. However, there is a lack of information on the impact of direct, point-source applications of sulfur into our environment from non-natural sources. As the demand for food increases with the need for more pest preventative measures, it is essential to understand the possible consequences of unregulated chemical use. Additionally, global warming implications associated with the climate crisis can alter chemical states of reactive elements like sulfur.Â

Because sulfur use lacks strict monitoring and has strong leaching potential, it can have localized and downstream impacts on ecosystem function (soil degradation), regular chemical cycling (sulfide abundance and methylmercury production), and human health. The long-term effect of elemental sulfur on soil quality suggests a decrease in soil health from sporadic acidification of soils. Additionally, the residence time of sulfur can differ immensely depending on soil type and water availability.Â California wineriesÂ often have higher concentrations of sulfur in soils not only due to the extensive use to combat powdery mildew but because droughts prevent sulfur from leaching elsewhere, resulting in soil acidification. However, leaching can result in unintended chemical transformations of sulfur. According to theÂ U.S. Geological Survey, extensive applications of sulfur to Florida sugar cane fields produced methylmercuryâ€”a potent, bioaccumulating, neurotoxinâ€”upon leaching into the Everglades. Additional concerns surrounding exposure from pesticide drift and related health effects showcase the need for better long-term documentation of sulfur exposure, especially in agriculturally adjacent communities. Unfortunately, researchers expect sulfur levels to continue to increase globally in many croplands, with countries like China and India still working to regulate fossil fuel emissions. However, researchers in the paperÂ recommend, â€śgreatly expanded monitoring of sulfur and examination of possible negative impacts of this increase, which include rising levels of mercury in wetlands, soil degradation and a higher risk of asthma for populations in agricultural areas.â€ť

Sulfur is one of the least-toxic alternatives to fungicides, yet excessive use from pesticide and fertilizer applications can have severe consequences for human, animal, and environmental health. Sulfur poses a significant threat to farmworkers, causing the most agriculture-related acute illnesses in California between 1998 and 2000. Additionally, pesticide drift is an omnipresent issue impacting communities surrounding farming operations, and sulfur drift from dust may harm humans, plants, and aquatic systems. Also, the manufacturing of fertilizers and pesticides containing sulfur is associated with sulfur dioxide pollution and its subsequent negative health impacts. Although sulfur use is prevalent in organic agriculture as a pesticide, a complete switch from chemical-intensive agriculture to regenerative organic agriculture can significantly reduce the threat of the climate crisis by eliminating synthetic fertilizer and toxic pesticide use. Furthermore, supporting the use of alternative practices such as polyculture rather than monoculture, mulching around the base of the plant, animal integration, and other organic practices can assist in eliminating the need for pesticides and the likelihood of pesticide drift. For more information about organic food production, visit Beyond PesticidesÂ Keep Organic StrongÂ webpage. Learn more about theÂ adverse health and environmental effectsÂ chemical-intensive farming poses for various crops and how eatingÂ organic produceÂ reduces pesticide exposure.

This entry was posted on Thursday, August 27th, 2020 at 12:01 am and is filed under Agriculture, Alternatives/Organics, Sulfur. You can follow any responses to this entry through the RSS 2.0 feed. You can skip to the end and leave a response. Pinging is currently not allowed.