Primates, Both Wild and Captive, Are Being Exposed to Toxic Pesticides and Flame Retardants 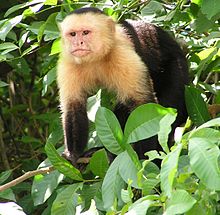 (Beyond Pesticides, September 15, 2020) Both wild and captive primates are being exposed to hazardous pesticides and flame retardants, according to research published this month in the journal Environmental Science and Technology. This is the first study to look at the threat anthropogenic (man-made) chemicals may present for this important order of animals. “We think a lot about habitat disturbance, logging, and hunting as threats to these species, while pollution has been overlooked,” study co-author Michael Wasserman, told Environmental Health News (EHN).

Scientists conducted their research by first obtaining fecal samples from three distinct primate populations: captive baboons from an Indiana zoo, wild howler monkeys from a research station in Costa Rica, and wild chimpanzees, red-tailed monkeys, and red colobus monkeys from a Ugandan national park. Samples were then tested for a range of chemicals, including 50 pesticides, and nearly 70 flame retardants.

Scientists discovered legacy pesticides (such as heptachlor, DDT, hexachlorohexane, chlordane, and related compounds) in every species tested, with the highest levels found in red colobus and red-tailed monkeys. In particular, DDT and its related compounds (DDD and DDE) were found to be widespread, with red colobus monkeys registering a median of 260 ppb DDE in its waste. Current use pesticides were only detected in the feces of primates from the United States and Costa Rica. Over half of these animals have chlorpyrifos pass through their bodies. Baboons in the Indiana sanctuary are the only population exposed to synthetic pyrethroids. Flame retardant exposure is also widespread, with the chemical tris(2-butoxyethyl) phosphate the most widely detected.

“We were surprised both at the number of chemicals measured in the feces and the levels of some of these chemicals in animals, especially those that are wild,” Marta Venier, PhD, senior author of the study, told EHN.

To elucidate exposure patterns, scientists investigated food sources, air quality, and other ambient environmental factors. Many of the conventional food and commercial feed provided to the captive baboons contained some level of pesticide. And air quality recordings in Uganda appear to correspond with with the chemicals found in primate feces. â€ś[L]evels of some of the chemicals in air were comparable to what we see in Chicago, which was really surprising,” Dr. Venier told EHN. Detections not explained by food or ambient air quality could be related to legacy exposure in surrounding vegetation, or geophagy, the eating of soil, for certain primates.

While no detection was found above minimum risk levels (MRL) set by the Agency for Toxic Substances and Disease Registry, the authors write, â€śMRLs for primates are expected to be different from those of humans used here; these estimates are based on numerous assumptions and simplifications; and MRLs rely on the single chemical approach, while feces revealed that primates are exposed to a complex mixture of chemicals.â€ť

Thus, it is unclear what the health implications are for primates exposed to this mixture of toxic human-made chemicalsâ€”though the outlook is not rosy. Scientists are encouraging further research, indicating that the presence of these chemicals in protected areas, â€śwarrants an evaluation of the possible biological effects resulting from exposure and a consideration of how exposure and susceptibility should influence conservation planning.â€ť

In the mid-2010s, scientists discovered that roughly 1 in 10 chimpanzees in a Ugandan wildlife preserve (located nearby the current study) exhibited dysplasia and facial deformities. Although studies are ongoing, many are linking this phenomenon to the use chlorpyrifos and other insecticides in nearby farms. Although data on pesticide impacts to primates is scarce, research conducted on their marsupial cousins finds that pesticide exposure does have the potential to cause adverse effects in the wild. An Australian study published earlier this year found that the herbicide atrazine can impede the reproductive success of exposed wallabies.

While specific effects on more complex species such as humans and other primates are often difficult to ascertain, it is clear that human production and release of hazardous chemicals into the environment is having significant effects on wildlife. Most concerning, these impacts start at the bottom of the food chain, with massive insect die-offs, and are now collapsing the populations of higher trophic species like birds.

It is not too late to take action against toxic pesticides, begin to reverse declines, and improve humanityâ€™s relationship with the natural world. Learn more about the damage pesticides cause to wildlife on Beyond Pesticides program page, and get active in your community to encourage safer methods of managing land and growing food.

This entry was posted on Tuesday, September 15th, 2020 at 12:01 am and is filed under Agriculture, contamination, International, Uncategorized. You can follow any responses to this entry through the RSS 2.0 feed. You can skip to the end and leave a response. Pinging is currently not allowed.

One Response to “Primates, Both Wild and Captive, Are Being Exposed to Toxic Pesticides and Flame Retardants”