Interplay Between Pesticides and Climate Change Has Driven Down Dragonfly Populations 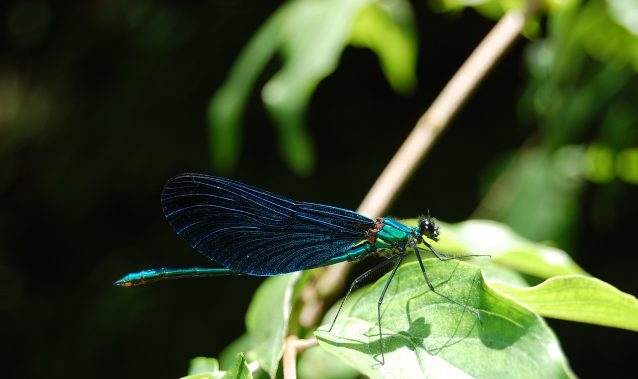 (Beyond Pesticides, February 2, 2022) Over the last 40 years, dragonfly species have declined in the United States due to an interplay between increasing pesticide use and rising temperatures from climate change, according to a recent study published in Ecological Applications by researchers at the University of Ottawa. The study highlights the need to evaluate and address insect declines on a macroecological scale, as human activities over the last several decades have become key drivers of Earth system processes in the Anthropocene era. At this macroecological level, the authors call for analysis of multiple interacting stressors, including land use change, pesticide applications, precipitation, and temperature.

To conduct their macro-scale analysis, researchers used a dataset consisting of over 200,000 observation records for dragonflies in the U.S since 1980. Then, U.S. land was subdivided into 100 x 100 km (62 x 62 mile) quadrants, and observation records plotted and refined to ensure that at least 15 species were observed in each quadrant used. Datasets were also obtained on land use changes (via HYDE dataset), pesticide applications (via U.S. Geological Survey), and changes in precipitation and temperature (via Climatic Research Unit).

Using this information, researchers constructed a series of models to test for potential interactions between the variables and dragonfly diversity and declines. Within the four factors analyzed, pesticides and temperature represented ŌĆ£the most informative interaction,ŌĆØ according to the study. Modeling also revealed the way dragonflies have shifted their range in response to rising temperatures. It is noted, ŌĆ£Overall, odonates had shifted their northern range limits by 158 km [98 miles] since 1980 in the USA.ŌĆØ

While precipitation and land use can negatively affect dragonflies, the modeling was mixed. Precipitation can cause volatilization of pesticides and other pollutants, but in models, increased precipitation improved dragonfly persistence. Because rain is expected to increase, but only in certain areas, researchers indicate that some populations may experience hardship while others increase range due to more rainfall. Land use was found to create minor negative impacts, but due to the way pesticides were separated from these effects in the modeling, the lower impact of these changes on aquatic environments, and the extent of land use change already ŌĆśbaked inŌĆÖ prior to the dataset used, did not have an outsized impact.

The interaction between pesticide use and temperature results in a range of risks to dragonflies. Increasing temperatures alone mean that dragonflies will emerge from metamorphosis earlier and earlier, resulting in increased chance of death. As the authors note, ŌĆ£ŌĆ”species nearer the edge of their physiological capacities may have reduced capacities to tolerate additional environmental changes, such as pesticides.ŌĆØ Pesticides and temperature changes also put dragonflies in larval stage at significant risk. ŌĆ£Increasing temperatures combined with exposure to pollutants can alter the metabolic transformation of pesticide residues, especially among aquatic species,ŌĆØ the study indicates. Thus, pesticides and their breakdown products can become increasingly toxic in warming waters, putting even highly tolerant species at risk.

Previous research reinforces this finding, though at a much smaller scale. A study published in 2020 from Griffith University found that coral reef fish were significantly harmed when exposed to varying levels of water temperature increases alongside varying rates of the insecticide chlorpyrifos.

The authors conclude that ŌĆ£[c]limate change interacts with recent, rapid rises in pesticide applications to increase dragonfly and damselfly extinction risks, a clear demonstration that multistressor frameworks are vital for identifying risks related to global change.ŌĆØ Researchers reinforce the importance of a broadscale, multistressor approach to adequately identify future risks to species in a changing climate. The data indicate that dragonflies are under significant stress, but their ability to quickly disburse, and move northward into new habitats provides them with an opportunity to avoid extinction.

The work also underlines that while human activities occur locally, the combined impacts of these activities have existential consequences on entire orders of species. Although the lack of broad-scale federal action on either pesticides or climate change is distressing, certain states, like California have begun to look at pesticide use in the context of agriculture and other macroecological factors through the development of a Natural and Working Lands Climate Smart Strategy.

Take action today by calling on state leaders to address the multitude of stressors brought by climate change by urging them to adopt a similar Climate Smart Strategy for your state.

This entry was posted on Wednesday, February 2nd, 2022 at 12:01 am and is filed under Climate, Pollinators, Uncategorized, Wildlife/Endangered Sp.. You can follow any responses to this entry through the RSS 2.0 feed. You can skip to the end and leave a response. Pinging is currently not allowed.