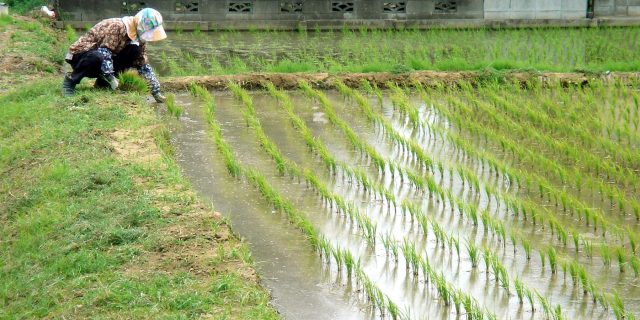 (Beyond Pesticides, March 15, 2022) Adding animal diversity to rice paddy farms reduces weed pressure, increases food production, and makes fertilizer use more efficient, according to a study published late last month in the journal eLife. As chemical-dependent, industrialized agriculture has spread across the world, local farmers are increasingly pressured into eschewing traditional agricultural practices in favor of monocultures in an attempt to meet the demands of global markets. This one-size-fits-all approach oversimplifies the interdependency within ecosystems, failing to incorporate the complexity of nature that many traditional and organic practices embrace. As the present study shows, research and investment into systems that promote natural diversity can provide insights that allow these approaches to leapfrog the chemical-dependent, monoculture paradigm of industrial agriculture.

Rice paddy fields are intentionally flooded, and crops are often grown in shallow water. In industrialized fields, monocultures of rice are planted out, and fertilizers and weed killers are applied at regular intervals. However, many traditional rice farmers around the world integrate aquatic animals into their paddies. In the present experiment, researchers conducted a 4-year long evaluation comparing the benefits of monoculture production against co-cultures of rice and aquatic animals. Co-culturing animals and rice differs slightly from traditional practices that incorporates the additional direct feeding of aquatic animals for market (in traditional practices, animals generally are not provided supplemental feed).

To compare the different systems, researchers established field plots with rice-carp, rice-crab, and rice-turtle co-cultures (these animals are widely eaten in rice-growing regions), as well as a rice monoculture. A mesocosm (an enclosed environment that examines natural processes under controlled conditions) experiment was also established with the same systems to evaluate nutrient efficiency. Animals in the diverse fields were introduced one week after rice transplant, provided with supplemental feed in the form of spent soybean residue (a waste product after soybean oil is extracted), and remained in the fields until rice harvest.

When compared to monoculture rice production, rice yield was on average 8% higher in the rice-turtle system, 9% higher in the rice-carp co-culture, and 12% higher for rice-crabs. Animal yields were 2.66, 0.85, and 0.56 metric tons per hectare for the rice-turtle, rice-carp, and rice-crab systems, respectively. Prior research conducted by the authors found that rice-turtle, rice-carp, and rice-crab systems increased total economic output by 710%, 205%, and 78%, respectively, over a monoculture rice system.

The diversified animal system also significantly lowered weed pressure on the farms in comparison to the monoculture fields. Weeds and other food (e.g., algae, plankton) from the paddy environment ended up comprising a significant portion of the aquatic animalsâ€™ food; for carp, crab, and turtle systems, 50%, 35%, and 16%, respectively. The researchers used no herbicide in any of the experimental plots, and there is evidence from the diverse plots that no herbicide use would be needed based on the weed pressure alleviated.

Diverse animal paddies also displayed faster rates of organic matter decomposition, indicating improved nutrient cycling. In the mesocosm experiments, feed that was not consumed by animals made its way into the crop, accounting for upwards of 30% of rice biomass. Compared to the monoculture fields, by the end of the experiment soil nitrogen content was higher in animal fields.

In aquatic rice cultures, the introduction of animals represented a multifunctional boon â€“ reducing weed pressure, increasing nutrient recycling and availability, and subsequently yields. This process provided significant benefits to farmers, who received a higher price for their work. The authors note, â€śAlthough costs of the cocultures are higher than the costs of monoculture because of the feed input and increased labor required for the management of two species, net income was still higher for cocultures than for monocultures because of the higher prices of the products and the reduced use of fertilizers and pesticides.â€ť

The forced simplicity of monoculture farming in a diverse and complex environment is ultimately unsustainable. It is common sense that clearing land of all flora and fauna and replacing it solely with human-focused crops leads to biodiversity decline and the loss of pollinators and other beneficial species, but scientific research has backed up these judgements. Agricultural soils under monocultures are not nearly as healthy as those that embrace diversity. Soil organic matter and nutrient cycling, critical for sustainable crop growth, is lower in monoculture systems by two to three fold, according to recent research.

The solution is as simple as the problem that was created. Adding back in plant diversity and moving from monoculture to multi-cropping systems produces higher biomass and seed yields, and reduces pest pressure and the need for pesticide use.

Organic agriculture provides the closest approximation to the sustainable food system the future requires. While organic has not yet eliminate monocultures, it requires farmers to maintain or improve soil health, which has the effect of encouraging practices that embrace natural diversity and complexity. Organic laws and rulemaking also support the concept of continuous improvement, incentivizing the development of safer and more sustainable practices once they become available. Naysayers of diverse organic systems point to yield gaps and cost, but fail to recognize the research and development gap between conventional and organic. As this study reveals, analysis of an enhanced traditional cropping system displays yield gains over an industrialized approach. With further research and development into traditional and organic cropping systems, the next agricultural revolution has the potential to be significantly more sustainable than the current paradigm.

For more information on the benefits of organic see Beyond Pesticides Why Organic webpage.

This entry was posted on Tuesday, March 15th, 2022 at 12:01 am and is filed under Alternatives/Organics, International, Uncategorized, Wildlife/Endangered Sp.. You can follow any responses to this entry through the RSS 2.0 feed. You can skip to the end and leave a response. Pinging is currently not allowed.