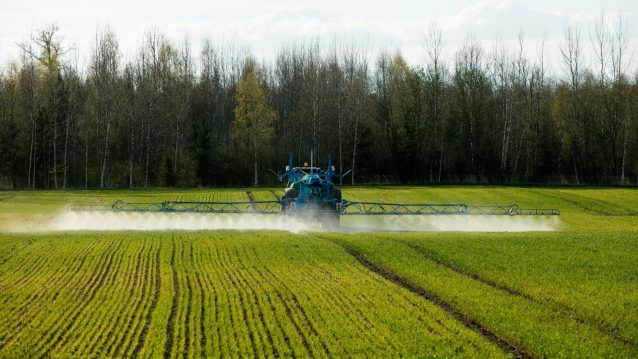 (Beyond Pesticides, May 10, 2022) Widespread weed resistance on chemical corn and soybean farms is leading farmers to till their fields more often, significantly increasing greenhouse gas (GHG) emissions. These findings were published late last month in the journal Nature Food by a team of Iowa State University researchers. With agricultural practices accounting for roughly 10% of U.S. GHG emissions, and 25% of worldwide releases, farming practices that preserve soil health and sequester GHGs are essential for the future of food production.

Tillage is a farming practice that can provide a range of benefits for crop production, but only in the right conditions. A range of tillage practices exist, ranging from yearly conventional tillage, where most crop residue is plowed into the soil, to conservation tillage where some residue remains, and no-till systems where the soil remains covered. Repeated tillage causes significant harm to soil structure and biology, and result in erosion and the release of GHGs like carbon dioxide, methane, and nitrous oxide from soil into the atmosphere. The harms of tillage have led both chemical and organic farmers toward no-till or reduced tillage systems.

Organic no-till farming, as practiced by farming groups like the Rodale Institute, employs the use of cover crops that are grown over the fall and winter, and then matted down over the top of the soil using a machine called a roller-crimper. This process suffocates weeds and creates a rich mulch that can often be directly planted into. Some smaller scale organic farmers may till a single time, lay down cardboard or other weed suppressants, and then establish compost mulch beds in which crops can be grown.

Chemical no-till, on the other hand, generally includes the use herbicides sprayed directly over the top of plants to manage weeds competing with crops. This practice is reliant on genetically engineering row crops (specifically corn or soy) to be tolerant of a particular herbicide, or herbicide-tolerant (HT). Glyphosate-tolerant ŌĆśRoundup ReadyŌĆÖ cropping systems have been the been the most popular over the last 25 years, providing chemical farmers a simple method of crop production without soil tillage.

Whatever gains this system provides in reducing atmospheric GHGs by reduced tillage is, according to researchers, eliminated by increases in tillage that have occurred since 2008, when weed resistance to glyphosate became widespread.

To make this determination, researchers created a land-ecosystem model, used mapping data on environmental changes, and long-term farmer surveys to determine how the chemical no-till model came into widespread adoption subsequently broke down. Corn-soybean cropping systems from the mid 1990s until the mid 2010s were analyzed, with 2008 marking a shift in trends.

From 1998 to 2008, corn and soy acreage under chemical no-till increased by over a combined 10 million hectares, roughly the size of Kentucky. This was associated with a reduction in tillage intensity during that time, which also reduced the GHGs emitted by tillage. However, from 2009 to 2016, as glyphosate resistance spread rapidly across multiple different weeds, researchers found increases in GHG emissions from chemical farmers returning to tillage. Particular areas around the country, like the western corn belt in the Dakotas and Minnesota, represented some of the highest GHG emissions from returning to these practices.

ŌĆ£Our work implies that the benefit of HT crop adoption in reducing tillage has reached its peak, while the emerging weed resistance is found to contribute to intensifying tillage practices,ŌĆØ the study reads. ŌĆ£As weed resistance persists and grows, tillage intensity is anticipated to continue to rise, which would further increase GHG emissions and contribute to global warming.ŌĆØ

The shift from reduced tillage to increased tillage is a product of a cropping system that was always intended to provide short-term profits, rather than promote environmental sustainability. The study authors emphasize that farmer choices in managing herbicide resistance are critical in addressing the issue. But many farmers under contract with large agrichemical companies have a difficult time implementing alternative practices outside of a chemical cropping system. The pesticide and agrichemical industry is generally promoting new, more toxic herbicide products utilizing chemicals like glufosinate, dicamba, and 2,4-D to supplement glyphosateŌĆÖs diminishing returns.

This approach keeps farmers on a treadmill, delaying what is clearly inevitable, while unnecessarily contaminating food, surrounding soil and farmland, water, and air. ŌĆ£Without an effective strategy to control weeds, tillage intensity could continue to grow in the future and could undermine greenhouse gas mitigation achievements from other agricultural activities,ŌĆØ said study author Chaoqun Lu, PhD in an Iowa State press release .

No-till organic addresses the failures of chemical no-till and has the potential to sequester carbon by retaining soil organic matter. Organic farms in general contain 13% more total soil organic carbon than conventional farms, as well as a higher level of the stable soil compounds fluvic and humic acid, a 2017 study found. According to calculations from the Rodale Institute in 2014, soil sequestration has the potential to store the greenhouse gas emissions of up to 52 gigatonnes of CO2.

While the agrichemical industry continues to make arguments for chemical farming based primarily on the need for higher yields, this short-term, myopic focus loses sight of health and a sustainable future that humanity must create to continue life on earth. Research on organic agriculture shows it can ┬Āprovide quadruple the performance, synergizing financial, human health, ecological, and socio-economic well-being. See Beyond Pesticides webpage on Organic Agriculture for more information.

This entry was posted on Tuesday, May 10th, 2022 at 12:01 am and is filed under 2,4-D, Alternatives/Organics, Dicamba, Genetic Engineering, glufosinate, Glyphosate, Resistance, Uncategorized. You can follow any responses to this entry through the RSS 2.0 feed. You can skip to the end and leave a response. Pinging is currently not allowed.