Study Shows Neonicotinoid Pesticide Has Devastating Effect on Termites Due to Eusocial Behavior, Similar to Bees

(Beyond Pesticides, May 26, 2015) A study led by Purdue University Entomology Professor Michael Scharf, Ph.D. finds that small doses of imidacloprid, a neonicotinoid pesticide, can halt the normal functioning of termite behavior, leaving colonies vulnerable to disease and eventual death. While this effect may be celebrated by the pesticide industry as a victory for termite control, it has serious implications for the use of imidacloprid and other neonicotinoid pesticides on all eusocial insects, such as ants and bees.

Eusocial insects thrive as a colony, working, living and sometimes even fighting diseases as one organism, rather than as many individuals existing together. Termites, specifically, exhibit a remarkable resistance to many diseases because 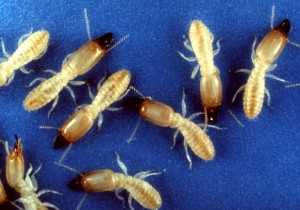 they engage in social grooming, clearing pathogens off of one another. Other examples of eusociality can be found in ant and bee colonies. Ant colonies create foraging trails and engage in cooperative transport, where they create long chains of ant individuals to form a whole assembly line to transport food back to the colony and work as one to carry large prey that would not be otherwise attainable. Honeybee colonies send out foragers to report back with the location of plentiful food sources so that other bees know where to go and donâ€™t waste time searching. Â Although we may often think of ants and termites as pests within structures, they also play important ecological roles. Termites are important decomposers. Ants perform many ecosystem functions –they are predators on many herbivores and their construction of nests and tunnels has impacts on chemical, physical, and biological properties of the soil. E.O. Wilson estimates that the biomass of ants on the earth is roughly the same as the biomass of humans. If low levels of neonicotinoids affect the eusocial behavior of these essential insects, there is a potential for serious ecosystem disruption.

The study, Molecular Signatures of Nicotinoid-Pathogen Synergy in the Termite Gut, found that small doses of imidacloprid in combination with the introduction of a previously manageable fungal disease wiped out the termite colony. When imidacloprid was introduced, termite social grooming slowed to a halt, leading to more pathogens left on the termite body. Termites have a symbiotic relationship with microbes in their gut, which normally help destroy any pathogenic threats. In addition to impairing grooming behavior, imidacloprid destroyed these microbial gut organisms, leaving the termites exposed to a fungal disease that normally would pose little threat.

A similar result was found in ants when exposed to low doses of imidacloprid. A 2012 study found that the grooming behavior of ants exposed to low doses of imidacloprid slowed, leaving them more vulnerable to disease and infection. For other eusocial insects like bumble bees, researchers have found that sublethal exposure to imidacloprid leads to mitochondrial dysfunction, which then negatively impacts navigation and foraging skills. Exposed bees will have greater difficulty, for instance, in recognizing the smell of a flower, or how to find their way back to their colony, which in turn can affect the colony as a whole. The United States Department of Agriculture completed a study on bees that found exposure to certain types of pesticides led to a higher occurrence of parasitic infection. While the study was not explicitly on neonicotinoids, it still demonstrates that pesticides create a vulnerability in insects that leave them open to destruction from a variety of other factors.

These studies add merit to the growing body of work that implicates neonicotinoid pesticides as the cause of bee declines. It has already been indicated that exposure to neonicotinoids can leave honey bees and other important non-target species vulnerable to viruses and predators, such as the Varroa mite. The pesticide industry likes to point to studies that conclude these viruses and predators are the only factors causing bee declines, but the refuting point that can be extracted from the study described above is that low-dose exposure to neonicotinoid pesticides is the tipping point, the first domino in a long line of implicated causes. Neonicotinoids such as imidacloprid break down normal functioning of eusocial insects, only then leaving them dangerously vulnerable to viruses and predators.

These findings showcase the inadequacies of pesticide testing, registration and regulatory standards issued Â by the Environmental Protection Agency (EPA). EPAâ€™s methods fall short by failing to study the interactions between different pesticides, the combination of pesticides and pathogens, and the detrimental impacts caused by these interactions. EPA employs a risk-assessment approach for approving pesticides that characterizes the magnitude of health risks to humans and wildlife from chemical contaminants in the environment based on exposure probabilities. EPA would better protect the environment by employing a precautionary approach, including more rigorous and complex testing of chemical interactions before approving a pesticide. Beyond Pesticides has long advocated a regulatory approach Â prohibits high hazard chemical use and requires alternative assessments, an approach that differs most dramatically from a risk assessment-based policy by rejecting uses and exposures deemed acceptable under risk assessment calculations given Â that there are safer alternatives.

It is important to explore the implications that this â€śvictoryâ€ť for termite control has on other non-target species. The pesticide industry will tout Â this study as a breakthrough in pest control, but it is essential to note that the same mechanisms that break down termite functioning affects Â beneficial insect species, breaking down their own necessary functioning. There are mechanical and least-toxic methods that are available to manage pests, like termites. See Beyond Pesticides ManageSafe webpage, which is dedicated to pest management practices that are protective of Â non-target species. Utilizing these least-toxic methods managing Â pests in homes and gardens ensures your home will be free of pests, while also protecting you, your family and other species from the damaging effects of pesticides.

This entry was posted on Tuesday, May 26th, 2015 at 12:01 am and is filed under Announcements, Chemicals, Imidacloprid, Litigation, neonicotinoids, Pests, Pollinators, termites. You can follow any responses to this entry through the RSS 2.0 feed. You can skip to the end and leave a response. Pinging is currently not allowed.