Fungicides Tied to Declining Bumblebee Populations in the United States 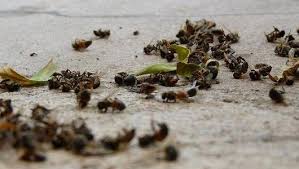 (Beyond Pesticides, December 5, 2017) Fungicides are likely playing an important role in the decline of North American bumblebee populations, according to new research published by a team at Cornell University. While overwhelming data continue to indicate that insecticides, particularly the neonicotinoid class of chemicals, are the leading factor in overall pollinator declines, Cornell scientists discovered that fungicides, in particular the chemical chlorothalonil, are likely compounding risk and toxicity for U.S. bumblebee species. As new studies continue to expand the chemical culprits in pollinator declines, calls for a wholesale change in agricultural practices toward more sustainable organic production are reinforced.

Cornell researchers began their investigation by focusing on what land use factors had the most impact on eight bumblebee species, many of which have been declining in the U.S. Bumblebee species were sampled at nearly 300 sites in 40 states during the summer months, and at each of the sampling sites, landscape variables were characterized and quantified for land use (urban v rural), habitat (high vs low latitude), and pesticide (insecticide, fungicide, herbicide) usage.

The strongest indicator of declining range within the selected bumblebee species was found to be overall fungicide use, with those in the northern U.S. undergoing the most rapid decline. Scientists focused in on the prevalence of Nosema bombi, a fungal pathogen that has also been closely linked to declining bumblebee species. They found that the use of the fungicide chlorothalonil at a site was the most accurate predictor of N. bombi prevalence.

“Nosema can be devastating to bumblebees and honeybees,” said lead author Scott McArt, PhD. “Since fungicide exposure can increase susceptibility of bees to Nosema, this may be the reason we’re seeing links between fungicide exposure, Nosema prevalence and bumblebee declines across the United States in this data set.”

Research from 2013 found that fungicide exposure honey bees encountered through normal pollination was linked with increased vulnerability to a close cousin of N. bombi, the pathogen N. ceranae. ŌĆ£Insecticides work; they kill insects,ŌĆØ Dr. McArt noted in a press release. ŌĆ£Fungicides have been largely overlooked because they are not targeted for insects, but fungicides may not be quite as benign — toward bumblebees ŌĆō as we once thought. This surprised us.ŌĆØ

Previous studies back up claims of chlorothalonil affecting the health of bumblebee populations. In 2015, a study published by entomologists at the University of Wisconsin found that bumblebee colonies kept in field enclosures where flowers were sprayed with field-realistic doses of chlorothalonil significantly diminished the coloniesŌĆÖ size and health.

Other fungicides have also been found to have negative impacts on pollinators. Myclobutanil, a commonly used fungicide found in the product Eagle 20, was linked to damage in the muscles that honey bees use to fly and keep warm during the winter in a study published earlier this year. ┬ĀScientists inferred that complex interactions between the fungicide, natural compounds in flowers, and the honey beesŌĆÖ detoxification system, known as the cytochrome p450 system, ultimately resulted in the muscle damage.

A similar mechanism is likely in place with bumblebees and recorded declines. “While most fungicides are relatively nontoxic to bees, many are known to interact synergistically with insecticides, greatly increasing their toxicity to the bees,” Dr. McArt said.

Beyond Pesticides and other health and environmental groups are calling for an end to the synthetic pesticide experiment first documented in detail by Rachel Carson in the 1960s. Since that time, the pesticide industry continued to ŌĆśinnovateŌĆÖ by producing synthetic chemicals with different, though no less deleterious, impacts that fit into U.S. Environmental Protection Agency risk assessment models, but have other impacts that are characterized as novel or ŌĆśmysterious.ŌĆÖ Only after investigation and published research from independent scientists do the mechanisms behind these effects become apparent.

ItŌĆÖs time to end the cycle of shifting from one health or ecological catastrophe to another by establishing real protections from pesticide use and a positive vision for the United StatesŌĆÖ agricultural future. Organic production is a viable, scalable, cost-effective method without any of the long-associated harm of conventional agriculture, but it requires moving government support away from chemical corporations and towards more sustainable practices. Representative Earl BlumenauerŌĆÖs Food and Farm Act, proposed as an amendment to the 2018 Farm Bill, is a good start towards moving agriculture in a safer direction. Tell your Congressional leaders to join Rep Blumenauer and support sustainable systems by signing Beyond Pesticides Action of the Week.

This entry was posted on Tuesday, December 5th, 2017 at 12:00 am and is filed under Fungicides, Pollinators, Uncategorized. You can follow any responses to this entry through the RSS 2.0 feed. You can skip to the end and leave a response. Pinging is currently not allowed.