European Nations Back Near Complete Ban on Neonicotinoids 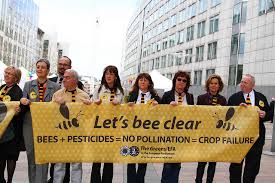 (Beyond Pesticides, May 1, 2018) On April 27, 2018, European Union (EU) member states backed a proposal to further restrict uses of bee-toxic neonicotinoids finding the pesticidesâ€™ outdoor uses harm bees. These restrictions go beyond those already put in place in 2013, and now all outdoor uses of clothianidin, imidacloprid, and thiamethoxam will be banned. Uses will only be allowed in permanent greenhouses where contact with bees is not expected. This historic move in Europe comes as the U.S. Environmental Protection Agency (EPA) still drags its feet on finding neonicotinoids are too toxic for bees and other organisms and bans their use.

According to the European Commission, the protection of bees is an important issue since it concerns biodiversity, food production, and the environment. An EU committee approved the plan to tightly restrict the use of the insecticides, acting upon scientific advice this past February from the European Food Safety Authority (EFSA) to tighten existing restrictions and protect bees, crucial pollinators. EFSA analyzed over 1,500 studies from academia, beekeeper associations, chemical companies, farmer groups, non-governmental organizations, and national regulators, and concluded that neonicotinoids do pose risks to honey bees and wild pollinators. In 2013, the EU placed a ban on the neonicotinoids on agricultural flowering crops, such as oilseed rape (canola), also based on an initial review by EFSA on the pesticidesâ€™ impact on bees.

Voting on the proposal had been postponed a number of times as countries were split on the move. However, the last meeting saw a majority voting in favor of the ban. Sixteen EU countries, including France, the UK, Germany, and Italy voted to ban the use of the three neonicotinoids.Â The new restrictions agreed to on April 27 go beyond theÂ 2013 ban. All outdoor use of the three substances will be banned and the neonicotinoids in question will only be allowed in permanent greenhouses where no contact with bees is expected.

Environmental advocates welcomed the vote.Â Emi Murphy, a campaigner at Friends of the Earth said: â€śThis a major victory for science, common sense and our under-threat bees. The evidence that neonicotinoid pesticides pose a threat to our bees is overwhelming.â€ť Commissioner for Health and Food Safety, VytenisÂ Andriukaitis,Â welcomed the vote, stressing thatÂ “the Commission had proposed these measures months ago, on the basis of the scientific advice from the European Food Safety Authority. Bee health remains of paramount importance for me since it concerns biodiversity, food production and the environment.”Â The European Commission will now adopt the new regulations in the coming weeks which will go into effect by the end of 2018.

In responding to The Guardian, Dave Goulson, PhD, at the University of Sussex, said the EU ban was logical given the weight of evidence but that disease and lack of flowery habitats were also harming bees. â€śAlso, if these neonicotinoids are simply replaced by other similar compounds, then we will simply be going round in circles. What is needed is a move towards truly sustainable farming,â€ť he said.

Â Numerous scientific studiesÂ implicate neonicotinoid pesticides as key contributors to the global decline of pollinator populations. EPAâ€™s own scientists have found that neonicotinoids pose far-reaching risks not only to bees but to birds and aquatic invertebrates. EPA is currently reviewing public comments on itsÂ preliminary ecological and human health risk assessments for the neonicotinoids clothianidin, thiamethoxam and dinotefuran, and a preliminary ecological risk assessment for the neonicotinoid imidacloprid. EPAâ€™s risk assessments find deadly impacts to birds from neonicotinoid-treated seeds, poisoned insect prey, and contaminated grasses. Researchers have found that tiny amounts of neonicotinoids are enough to cause migrating songbirds to lose their sense of direction. A recent study by U.S. Geological Survey (USGS) researchers found neonicsÂ widespread in the Great LakesÂ at levels that harm aquatic insects, and potentially the aquatic food webâ€”the foundation of healthy aquatic ecosystems. Canadaâ€™s pesticide regulatory agencyÂ has recommended banningÂ the most widely used neonicotinoid,Â imidacloprid, based on harms to aquatic ecosystems.

Given this historic move in Europe, U.S. regulators must also take action to protect sensitive species from toxic neonicotinoids. Help push EPA to take substantive action on neonicotinoids byÂ urging your U.S. Representative to support the Saving Americaâ€™s Pollinators Act. WithÂ managed honey bee losses remaining at unsustainable levelsÂ and many wild pollinators at risk of extinction (1,Â 2,Â 3), itâ€™s time, for the future of food and our environment, for the U.S. to finally protect pollinators.

This entry was posted on Tuesday, May 1st, 2018 at 12:00 am and is filed under neonicotinoids, Pesticide Regulation, Pollinators. You can follow any responses to this entry through the RSS 2.0 feed. You can skip to the end and leave a response. Pinging is currently not allowed.