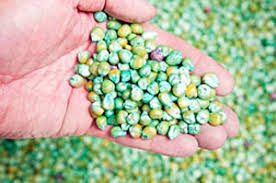 (EPA) released the preliminary ecological (non-pollinator) assessments for the neonicotinoids (neonics); clothianidin, thiamethoxam, dinotefuran, and the terrestrial ecological assessment for imidacloprid, finding that these pesticides pose both acute and chronic risks to aquatic life and birds. Treated seeds are identified as posing the highest dietary risks to birds, confirming previous research that neonics are highly hazardous not only to bees, but to birds, aquatic life, and other non-target organisms.

Released December 15, 2017, EPA opened the public comment period for these assessmentsÂ until February 20, 2018. Along with the risks identified in the assessments, the agency is specially requesting feedback on the benefits of continued use of the neonics in cotton and citrus crops identified in last year’s pollinator assessments as posing risks to honey bees. EPA states, “We believe early input from the public will be helpful in developing possible mitigation options that may be needed to address risks to bees.” This despite evidence of long-term systemic exposures to non-target organisms that support a phase-out of these pesticides. EPA believes that neonicotinoids are crucial for the management of Asian citrus psyllid, an invasive pest that causes citrus greening, and for plant bugs and stink bugs in cotton. However, other non-chemical, or biological, management have been successfully employed.

EPA found that risks posed to certain birds from eating neonic-treated seeds exceeded the agencyâ€™s level of concern by as much as 200-fold. For clothianidin, the agency finds that as little as 1-5 seeds of treated corn will be enough to exceed acute and chronic levels of concern for small to large birds. Specifically, EPA states, “Dietary exposures from clothianidin treated seeds are noted to result in the highest acute and chronic risks from the terrestrial risk assessment to birds and mammals.”

Clothianidin, which is widely used as seed coatings on millions of acres of corn and soybean, is also determined by EPA to be very highly toxic to other taxa, including shrimp and aquatic insects. Reproduction effects is observed in several freshwater and estuarine/maine invertebrates. Developmental effects have occurred in benthic invertebrates living at the bottom of water bodies.

EPA has already released the preliminary pollinator assessment for the neonicotinoids which identified risks to pollinators from a variety of uses on agricultural crops. The aquatic assessment for imidacloprid, also released last year, finds that imidacloprid threatens the health of U.S. waterways with significant risks to aquatic insects and cascading effects on aquatic food webs.

As a result of risks to aquatic organisms, the Canadian pesticide regulatory agency has recommended banning imidacloprid, a decision on which has been delayed. In Europe, a recent survey finds that streams across the United Kingdom (UK) are contaminated with neonics. The European Commission met on December 12 and 13, 2017 to decide on a proposal to extend the 2013 neonicotinoid ban to all outdoor crops, but this decision was delayed. The issue is expected to be on the agenda again in early 2018. The UK government has reversed its previous stance on neonicotinoids, now saying that it should be banned due to their harm to pollinators.

The comment period is open until February 20, 2018. You can view EPAâ€™s assessments here and submit your comments here.

This entry was posted on Thursday, January 4th, 2018 at 12:00 am and is filed under Aquatic Organisms, Biological Control, Birds, Canada, Clothianidin, dinotefuron, neonicotinoids, Thiamethoxam, Uncategorized. You can follow any responses to this entry through the RSS 2.0 feed. You can skip to the end and leave a response. Pinging is currently not allowed.