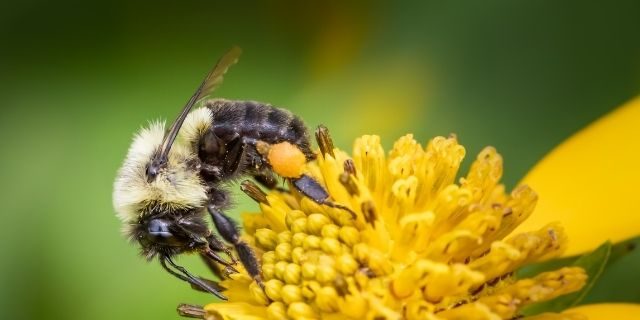 (Beyond Pesticides, February 10, 2021) Pollinator advocates are petitioning the U.S. Fish and Wildlife Service (USFWS) to list the American bumblebee (Bombus pensylvanicus) under the Endangered Species Act. The petitioners are the Bombus Pollinator Association of Law Students at Albany Law School and the Center for Biological Diversity. Like many other wild pollinators, the American bumblebee has undergone dramatic reductions in recent decades. According to petitioners, the last 20 years saw an 89% decline in the pollinatorâ€™s population.

Declines of the American bumblebee have occurred throughout its range, which encompasses 47 of the lower 48 states. However, there are also particularly hard hit regions. In New York, for instance, the pollinators have experienced a stunning 99% decline in relative abundance. Midwestern populations are also severely affected. Losses have followed in lock step with declines in the rusty patched bumblebee, which was listed as endangered in 2017. While the rusty patched has lost 90% of its midwestern range, the American bumblebee has experienced 83% declines. The petitioners note that the American bumblebee declined across a larger land area, and in several states where it was once the most populous pollinator.

The causes behind these catastrophic declines are familiar to many pollinator advocates. Pesticides, habitat loss, disease, climate change, and competition have all played a role. Most of these factors are human-driven, and can be addressed if given the opportunity.

Failure to address human-made factors impacting pollinators is likely to exacerbate these issues. â€śPollinators such as the American bumblebee are essential if we intend to combat climate change successfully,â€ť said Claire Burke, a student at Albany Law School. â€śWithout Bombus pensylvanicus spanning 47 of the lower 48 states, vegetation at the heart of the food chain for animals and humans will be hard pressed to reproduce and survive.â€ť

Pollinators are responsible for one in three bites of food, and pollination services are valued at over $125 billion globally. Within the United States, a 2014 Presidential Memorandum found that pollinators provide $24 billion annually to the US economy.Â Â

â€śItâ€™s unfortunate that weâ€™re forced to call upon the Endangered Species Act to protect a species so fundamental to human and ecosystem health,â€ť said Keith Hirokawa, a professor of law at Albany Law School. â€śIt is our hope that the Biden administration grasps the gravity of this moment.â€ť

After the Trump Administration delayed in listing the rusty patched bumblebee, failed to implement meaningful protections for monarch butterflies, and attacked foundational aspects of the Endangered Species Act, advocates are urging that the Biden administration will reverse course.

â€śThereâ€™s no question that human activities have pushed this bee toward extinction, so we have the ability to wake up, reverse course, and save it,â€ť said Jess Tyler, a staff scientist at Center for Biological Diversity. â€śBut this late in the game, itâ€™s going to take the powerful tools provided only by the Endangered Species Act to get the job done. Anything short of that and we risk losing this iconic part of the American landscape forever.â€ť

Take action today to urge the Biden administration to implement protections for another endangered pollinator, the monarch butterfly. And for more information on how you can work to protect pollinators in your region and community, see the BEE Protective webpage.

This entry was posted on Wednesday, February 10th, 2021 at 12:01 am and is filed under Department of Interior, Fish and Wildlife Service (FWS), Uncategorized, Wildlife/Endangered Sp.. You can follow any responses to this entry through the RSS 2.0 feed. You can skip to the end and leave a response. Pinging is currently not allowed.