Hummingbirds Harmed by Pesticides Killing Off Bees, Butterflies, and Other Pollinators 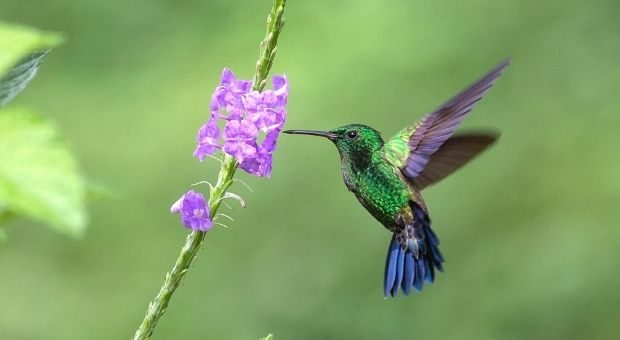 (Beyond Pesticides, February 23, 2021) The same pesticides implicated in the worldwide decline of insect pollinators also present significant risks to their avian counterparts, hummingbirds. Well known for their nectar-fueled hovering flight powered by wings beating over 50 times per second, hummingbirds display unique reactions to toxic pesticides. Research by scientists at the University of Toronto finds that hummingbirds exposed to systemic neonicotinoid insecticides for even a short period of time can disrupt the high-powered metabolism of this important and charismatic animal.

Scientists began their experiment by trapping 23 wild ruby-throated hummingbirds and housing them in an animal care facility. One group of birds acted as a control and received no pesticide exposure, while the rest were assigned either low, middle, or high exposure (1 part per million [ppm], 2ppm, and 2.5ppm, respectively) to the neonicotinoid imidacloprid. Scientists determined these amounts based upon probable nectar contamination in the real world. The pesticide was incorporated into the sugar solution provided to the birds over the course of three days.

Within two hours of exposure to the pesticides, hummingbird metabolism dropped significantly. While the control group increased energy expenditure between 1% to 7%, the low exposed group displayed a 6% average decline, the medium a 10% decline, and the high exposure group showed 25% reduced energy expenditure.

ÔÇ£We donÔÇÖt know exactly why it goes down ÔÇô whether the chemical is disrupting the metabolic processes or because they simply feel sick as a result of exposure ÔÇô but they definitely show a reduced metabolic rate during the first few hours after ingesting it,ÔÇØ said study author Ken Welch, PhD in a press release.

Although researchers did not observe impacts to flying or feeding behavior, or other signs of neurotoxicity, hummingbird exposure to these insecticides could still have wide-ranging effects. ┬áÔÇ£We only looked at the first few hours after exposure, but theoretically there could be a long-term impact on the central nervous system,ÔÇØ said Dr. Welch.

Neonicotinoids act on the nicotinic acetylcholine receptor (nAChR) in insects. By bindings to that site, they work to essentially paralyze a target insect, impeding movement and breathing. The pesticide industry has long claimed that this mode of action is only harmful for invertebrates. However, Dr. Welch notes, ÔÇ£We could assume that those potential risks also exist for hummingbirds through long-term exposure. At the moment, we just donÔÇÖt know. It would require more research.ÔÇØ

Given their high energy demands and with such razor thin margins for error, neonicotinoids may significantly damage hummingbirdÔÇÖs fitness in the wild. ÔÇ£If hummingbirds are skipping their normal foraging behaviour because of a dip in their metabolic rate, it could put them in an energy bottleneck,ÔÇØ Dr. Welch says. ÔÇ£If theyÔÇÖre already low on energy, and then they are exposed to this pesticide, that hummingbird may very well find itself in an energetic crisis not too long after.ÔÇØ┬á

Findings on the danger neonicotinoids pose to hummingbirds decades after the chemicals were first permitted to be used in the environment, and by independent scientists, not regulatory agencies, is indicative of a regulatory approach that fails to embrace precaution from the outset. Overwhelming data has already been established on the threat neonicotinoids pose to the health of ecosystems worldwide. The list of animals found to be adversely affected by neonicotinoids is extensive, ranging from humans and other mammals, to insect pollinators, songbirds, amphibians and other aquatic species.

While some credit is due to regulators in Canada and the European Union for following the science, tracking impacts after approval, and eventually banning most neonicotinoid use, nothing similar can be said about the U.S. Environmental Protection Agency (EPA). The agency is merely proposing modest label changes that will do little to stop or reverse the damage these chemicals are causing to the natural world.

Eliminating neonicotinoid insecticides and moving toward safer, organic practices will that protect pollinators and the entire web of life on which human society depends. Learn more about the dangers pesticides pose to wildlife on Beyond PesticidesÔÇÖ Wildlife webpage. Take action and tell the Biden administration and Congress to halt all new pesticide registrations until science is restored to its rightful place in EPA decision-making.

This entry was posted on Tuesday, February 23rd, 2021 at 12:01 am and is filed under Beneficials, Biodiversity, Birds, Environmental Protection Agency (EPA), Imidacloprid, Increased Vulnerability to Diseases from Chemical Exposure, neonicotinoids, Pollinators, Uncategorized. You can follow any responses to this entry through the RSS 2.0 feed. You can skip to the end and leave a response. Pinging is currently not allowed.

One Response to “Hummingbirds Harmed by Pesticides Killing Off Bees, Butterflies, and Other Pollinators”