Giving Thanks to Farmworkers this Holiday 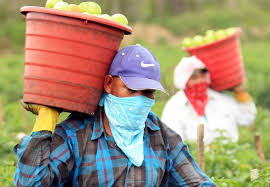 (Beyond Pesticides, November 22, 2018) As we sit down for our Thanksgiving meal with friends and family, let us all take a moment to give thanks to the hardworking individuals that made our meal possible. Farmworkers and farmers toil day in and day out in the field, growing the staples that make the holiday special. This year, farmworkers need our support more than ever, as powerful forces within the agrichemical industry continue to influence decisions that deny them the protections and compensation they deserve for their hard work.

After a proposal under the Obama administration to update farmworker protections following decades of inaction, former Environmental Protection Agency Administrator Scott Pruitt reversed course and decided to delay implementation. The new policy, representing the bare minimum required to improve the deplorable conditions many farmworkers confront, would have raised the age to apply highly toxic pesticides to 18, and improved training materials, among other basic changes. The agency then determined in December 2017 that it would not only refuse to implement changes as planned, but potentially do away with them all together. Allowing minors to spray toxic pesticides was put back on the table, as were 25 to 100 ft exclusion zones after toxic chemical use, and the ability for farmworkers to designate a representative to obtain information about pesticide spraying.

But advocates are fighting back in the courts, and in March 2018 a District Court judge ruled that EPAâ€™s decision to delay was illegal. And numerous lawsuits, including those from state attorneys general and civil society organizations, have been filed in defense of farmworker protections.

The scientific literature confirms that farmworkers, their families, and their communities face elevated hazards from pesticide exposures, and existing farmworker data finds that the incidence rate of pesticide poisoning is extremely high. An average of 57.6 out of every 100,000 agricultural workers experiences acute pesticide poisoning, illness or injury each year. And when these incidents occur, there is no guarantee that justice will prevail, even in the form of financial settlement. Pesticides like the herbicide 2,4-D, the organophosphate chlorpyrifos, and synthetic pyrethroid insecticides are routinely detected in the bodies and homes of farmworkers. The risks of exposure from these chemicals have long-lasting impacts on farmworker communities.

Giving this information, it is not bombastic to say that farmworkers are giving years of their lives to put food on the tables of countless Americans. As we enjoy our Thanksgivings fixings over the holiday, the turkey, potatoes, stuffing, cranberry sauce, pumpkin pie, and apple crumble, remember all the hardworking farmworkers who have helped to bring our meal to the Thanksgiving table.

There are ways we all can help farmworkers gain the protections they deserve. First, spread awareness of their plight. Speak with your friends about farmworker issues, and share videos like the one from Beyond Pesticidesâ€™ National Pesticide Forum workshop on Farmworkers, Families and Health. Second, take action by contacting your members of Congress. Go to Beyond Pesticidesâ€™ website to send a letter, or better yet, contact your representatives directly through a phone call. Lastly, purchase organic whenever possible. Although organic does use some pesticides, they are of significantly lower toxicity and used sparingly only according to need, not as a regular course of business. By promoting a safer food production system, we can help improve farmworkers’ conditions.

The food we choose to eat has a significant effect on those who grow the food we eat. Rather than purchasing conventional products grown in contaminated fields, strive to go organic this Thanksgiving, and influence friends and family to do the same.

To help better explain the benefits of organic food consumption, Beyond Pesticides invites readers to use theÂ Eating with a ConscienceÂ database, which evaluates how toxic chemicals used used food items effect the environment and farmworkers. The more we can grow organic, the more we can establish production systems that do not subject farmers and farmworkers to toxic chemicals as they continue to do the important work of growing our nationâ€™s food.

Have a Healthy and Happy Thanksgiving, from Beyond Pesticides!

This entry was posted on Wednesday, November 21st, 2018 at 3:34 pm and is filed under Uncategorized. You can follow any responses to this entry through the RSS 2.0 feed. You can skip to the end and leave a response. Pinging is currently not allowed.