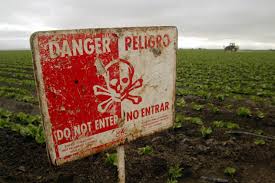 (Beyond Pesticides, November 30, 2018) A study published this month in Science of the Total Environment reveals numerous pesticide residues persisting in soil, harming the viability of agricultural lands and increasing risk of off-site contamination. Funded by the Horizon 2020 programme of the European Commission, researchers from the European Diverfarming project at the University of Wageningen in the Netherlands suggest nations urgently reevaluate conventional land use and inputs including water, energy, fertilizers, machinery and pesticides. Researchers decrying the lack of soil protection policies endeavored to determine which pesticides had the highest soil persistence and toxicity to non-target species.

Three hundred seventeen surface soil samples were analyzed from 11 European countries. Selected countries were those with the largest amounts of active agricultural land, characterizing six distinct cropping systems. Sampled soils purposefully represented different soil properties and were taken from crops with the highest pesticide use per hectare. Samples were then analyzed for the concentration of 76 pesticide residues. These 76 pesticides were selected as being most often applied on conventional crops.

Southern countries of the European Union (EU) show significantly fewer residues than the northern, eastern and western EU regions. Soils in the eastern EU were those most frequently containing mixtures of residues of more than six pesticides.Â  All sampled soils from root crops showed pesticide residues, with 85 percent of samples showing multiple residues.

Overall, 43 different residues were detected, with a total of 166 pesticide combinations observed. Glyphosate, DDT (which was banned in 1972) and broad-spectrum fungicides, including boscalid, epoxiconazole and tebuconazole, were the compounds detected most frequently and at the highest concentrations. Glyphosate was the most widely detected.

However, pesticides residues are not a problem solely for the EU. With toxic pesticides used across the globe, advocates explain chemical-intensive agricultural and mismanagement of pesticide waste has become a global problem.

The chemical industry claims pesticide use has increased crop yields. However, pesticides have not been shown to increase profits for farmers. In addition, the onset of herbicide tolerant crops has resulted in an increase of pesticide use, making chemical companies rich while farmers and consumers suffer.

Soil contamination alters soil functions, soil biodiversity and food safety, with pesticides linked a wide range of diseases. All the while, organic agriculture, incorporating cover crops and crop rotations, improves soil health and enhances natural ecosystem processes. With the planetâ€™s soils and waterways increasingly compromised by chemical-intensive practices, there is an urgent need to swiftly move towards regenerative organic agriculture.

To grow nutrient-dense produce, farmers need living soil in which countless living organisms, bacteria and fungi are allowed to coexist.

Worried about contamination of food crops and ecosystems? Talk to local farmers. Begin growing your own food organically with a supply of organic seeds and plant starts. Begin composting food scraps, leaves, and brush.Â  Add water and turn the organic matter regularly with a pitchfork or shovel.Â  This process results in compost, a soil conditioner, which can be added to gardens, potted plants and around fruit trees.

As was said in Seeds that Poison, â€śOur future depends of our respect for nature and the complex biological systems that sustain life.â€ť Help Beyond Pesticides eliminate toxic pesticides and grow organic solutions. Learn more about how organic agriculture offers numerous benefits to human health and the surrounding environment.

This entry was posted on Friday, November 30th, 2018 at 12:00 am and is filed under Biodiversity, contamination, Contamination, DDT, Disease/Health Effects, Fungicides, Genetic Engineering, Glyphosate, International, Persistence, Pesticide Residues, tebuconazole, Uncategorized. You can follow any responses to this entry through the RSS 2.0 feed. You can skip to the end and leave a response. Pinging is currently not allowed.